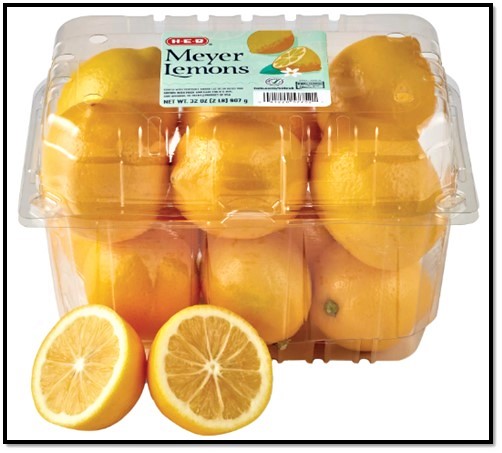 I’ve never given much thought to lemons.

When I was growing up, there were always a few lemons in the fridge, mainly for my mom to squeeze onto her fish on Friday nights.

Then there was lemonade in the summer, which was a frozen concentrate in a can that you mixed with water.  And sugar.  A lot of sugar.

When my sister got older and started experimenting with cooking, she made lemon meringue pie, and that was yummy.

When I got older and discovered iced tea, I learned that a wedge or two of lemon added to the flavor.  So did sugar.  A lot of sugar.

As time passed I also discovered that lemon was good adult beverages – a twist of peel, a slice, or lemon juice as an ingredient for whiskey sours, Cosmopolitans, and a drink called a “Corpse Reviver” (pictured) which was supposed to cure hangovers.

Lemons have been around forever, so…

Or so I thought, until a couple of years ago when I tasted one of these:

I’m talking about the lemon on the right:

You’ll notice that it’s not just smaller than the regular lemon on the left, but it’s almost orangey colored.  That’s because, according to this article:

So the Meyer lemon is smaller, it’s a hybrid, and according to this article:

Appearance:  Regular lemons have a knobby, yellow skin, a thick layer of white pith, and bright yellow inner flesh.  Meyer lemons are rounder, smoother, and more orange in color than standard lemons.  Their thin skin ranges from dark yellow to rich egg yolk, and their inner skin is a deep yellow.  Additionally, Meyer lemons have barely any pith.

Flavor:  Regular lemons are incredibly acidic and sour.  Since Meyer lemon is a hybrid, it has a mellow, sweet flavor.

Sink your teeth into a regular lemon and you do this:

No pucker face with Meyers, due to a flavor that, in addition to the above description of “mellow, sweet” has been described as “slightly floral,” and “fragrant and bright.”

Another interesting thing about Meyer lemons is that in their original use, nobody was sinking their teeth into them.

Instead, says the NPR article,

“In its native China, it was primarily a decorative houseplant.”

Which meant that in their yard and/or home, wealthy Chinese could have these:

Which also meant that they’d have rotten lemons on the ground below:

Meyer lemons, said the NPR article, might have remained a mere Asian house/garden decoration if not for this man:

“In the early 1900s, the U.S. Department of Agriculture sent Frank N. Meyer [pictured], an agricultural explorer (yes, that was his actual job title) on several trips to Asia with the mission of collecting new plant species.  Among more than 2,500 plants that he introduced to the U.S., the Meyer lemon was named in his honor.”

People in the regions where Meyers could be grown – California, Florida and Texas – took a liking to the lemons, but again – as something to decorate their backyard.

Occasionally someone would show up with a box of Meyers at the local farmers market, but they weren’t a commercial product:  “Their thin, delicate skin and high juice content made them too fragile to distribute commercially,” said NPR.

So that was the life of Meyer lemons, and it would likely have remained so if not for none other than…

Yes!  Thanks to the late Martha Stewart and her CBD Meyer Lemon Oil Drops…

Along with her apparently non-CBD Meyer Lemon Solid Paper Tags:

But these items aren’t how Martha made Meyer lemons famous.

No, her love for the fruit goes back at least to 2016 and to her blog, Martha:  Up Close and Personal:

Where she extolled the wonderfulness of Meyers:

That is, when people could find them on grocery store shelves.

Earlier I mentioned the fruit’s thin fragile skin and the difficulty of shipping them.

That meant that for most people, Meyers were maybe available only from early winter through early spring, unless you lived where the lemons are grown:  the citrus growing regions of California, Texas, and Florida.

So I’m lucky – I live in San Diego and for the past two years I’ve been getting Meyer lemons at my grocery store year round.  I asked a produce person at the store exactly where they were grown, and the best he could do was, “In the USA.”

Wherever they’re from – I love ‘em.

And if your grocery store doesn’t have Meyers, don’t despair – I found a number of online sites that will ship Meyer lemons, though it’s unclear whether they’re always available.

If you haven’t tried Meyer lemons, you’re in for a sweet treat.

On that note – and not to be outdone by Martha Stewart – I have my own Meyer lemon recipe to share, and I’ll close with that: