Life is too short to be in a position or company that doesn’t bring you joy or doesn’t support you through difficult times.  Loving what you do and loving where you do it are keys to long-term health and happiness.

I recently read that quote in an article by Marissa Levin who, according to her website, is

In the article Ms. Levin shares that at her first company, “We had a Good Times Committee (GTC) that was responsible for planning fun events.  We had a line item in our budget for fun.  No matter what the day held, we knew there would be some laughter along the way.”

I wish she’d gone into more detail about their “budget for fun.”  Exactly how much did they spend and on what?  Perhaps…

I also wish Ms. Levin had gone into detail about how many actual people she’s interviewed about “loving what you do and loving where you do it.”  Did she talk to, for example,

I’m suspecting that for these folks and a majority of working people all over the world, “bring you joy” wasn’t high on their list of job-hunting criteria.  They were too busy ascertaining if the job would pay a decent wage so they could support their peculiar habits like having a place to live, eating, and

Because, Ms. Levin, that is why people work.

I love KPBS TV and radio.

OK, pledge drives not so much, but otherwise?  True love. 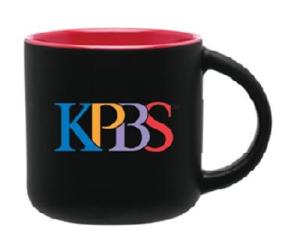 And I put my money where my mouth is – I’m a donor, and glad to be.

I’d gone online to donate and when I got to the part where they offer a gift, I was going to decline as I always do.  But a nice-looking coffee mug caught my eye.

I drink lots of coffee, so why not from a KPBS mug?

It was after – and only after – my donation was complete, that I learned from my receipt that $8 was deducted from my donation, identified as a “Value of Premium.”

Yes, there it was – I was being charged for what KPBS calls a “gift.”  Now, having given and received gifts over the years, I’m pretty clear on what a gift is:

Where, in there, does it say, “A gift is something you pay for?”

My annoyance doubled – no, quadrupled – when the mug arrived.  For there on the bottom was a sticker that read, “Made in China.”

Now I was really ticked.  Not only was I not advised ahead of time that my donation amount would be reduced to pay for this “gift,” but it’s made in China?  Hello?  KPBS couldn’t find a mug maker in San Diego?  The entire U.S.?

So I went online and shared these thoughts with KPBS.  I was polite, but firm.  I advised that I expected a prompt response to my issues, otherwise my continued financial support was doubtful.

To their credit, the next day I received a response from a gentleman in KPBS’ Audience and Member Services Department.  He said, in part,

donor can deduct on their taxes.

“We are not charging you the $8.  In your case, you made a donation of $60 to KPBS, a non-profit organization, and as your gift you had chosen the KPBS Black Ceramic mug with the red interior.  The Fair Market Value of that item is $8.  Based on U.S tax law, the Fair Market Value of a gift is to be subtracted from the total donation.  In this case, your total of $60 – $8 (FMV) would equal out to $52.00.  That is the amount that you would be able to deduct on your taxes.”

Oh, now get it.  KPBS isn’t charging me $8 for the mug – the federal government is.

There was no response to my question about why I wasn’t advised about the FMV prior to completing my donation.  There was a response as to why the coffee mug was bought from in China:

So I fired back a reply, asking how much information he needed about where the mug, excuse me, “gift item” was made, when it’s clearly marked “Made in China”?

I also asked him to verify that the online donation system does not advise of the FMV deduction until after the donation is complete.

At this point I’m wondering, Am I the first person in the history of KPBS online donations to question this don’t-tell-until-the-donation-is-done policy?

Am I the first person to question why this so-called “gift” was not purchased from a U.S. company? 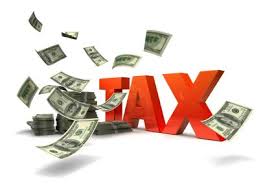 Here’s why the latter issue especially ticks me off.  In addition to KPBS receiving local U.S. dollars from you and me in donations, it also receives money from the federal government.  That’s right – our tax dollars.  And I have no problem with my tax dollars going to support public broadcasting.

According to the Corporation for Public Broadcasting (CPB) website, in 2016 the CPB asked for, and received, $445,000,000 of our tax dollars.  CPB is asking for the same amount in 2017.  The “Formula for Allocating CPB’s Federal Appropriation” indicates “Not less than 89%…to grants to stations or program producers.”  “Stations” includes KPBS, both TV and radio.  “Program producers” means many of the shows we watch or listen to are funded by the CPB.

With local and federal tax dollars coming in, I think KPBS should spend those dollars in the U.S. and buy their “gifts” here, not over there.

The member services gentleman got back to me about the mug:

“The actual cost of the mug is $4.95, with tax and S&H costs it’s approximately $6.06.  Our cost is less than the Fair Market Value because it is a bulk cost, since orders from our vendor come in large quantities.

“Though the mugs are made in China, our vendor, Made to Order, is a local company.  When possible, we do prefer to use USA made gift items and definitely local vendors.”

Do you know what “when possible” and “we do prefer” sound like to me?

Do you know what Star Wars’ Yoda said about “try”?

The gentleman did not address my issue with their don’t-tell policy, so I emailed again.  And while I was at it, I added that I’d never heard the FMV deduction mentioned during TV or radio pledge drives either.

Apparently at this point, KPBS decided it time to bring out the Big Guns:  I received a lengthy reply from the supervisor of the Audience and Member Services Department.   He was very polite, and very professional.

He did not address the mug-made-in-China issue, but he did discuss asking about “the technological feasibility” of providing the FMV information ahead of time to online donors.  He indicated that he could bring up the idea with his “superiors for their consideration.”

He also discussed a number of other things, and I did the same in my even-more-lengthy reply.

These were my bottom-line suggestions:

Stop and rethink the whole “gift” thing.  Many charities/non-profits don’t give gifts – they give sincere thanks for your donation and leave it at that.  I found a 2012 article in Forbes magazine, Charities:  Don’t Thank Your Donors With a Gift, that talks about a paper in the 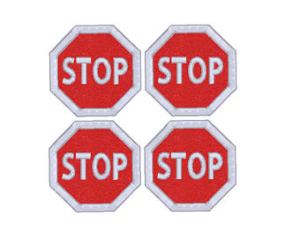 Journal of Economic Psychology and “a series of experiments that show that, contrary to expectations, rewarding contributors cuts donations in most circumstances.”  The article goes on to suggest, in part, that “promising donors a thank-you gift can be hazardous to a non-profit’s income!”

Stop telling donors after the fact that the amount of their donation may or will be reduced due to the FMV.  This means online and on TV and on the radio.  Tell us ahead of time so we can make an informed decision about choosing or not choosing the “gift.”

Stop buying “gifts” from other countries when comparably priced American-made items can be purchased (and you know they can). 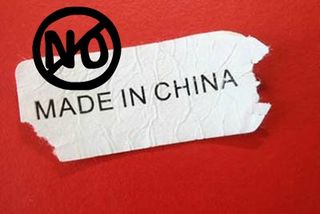 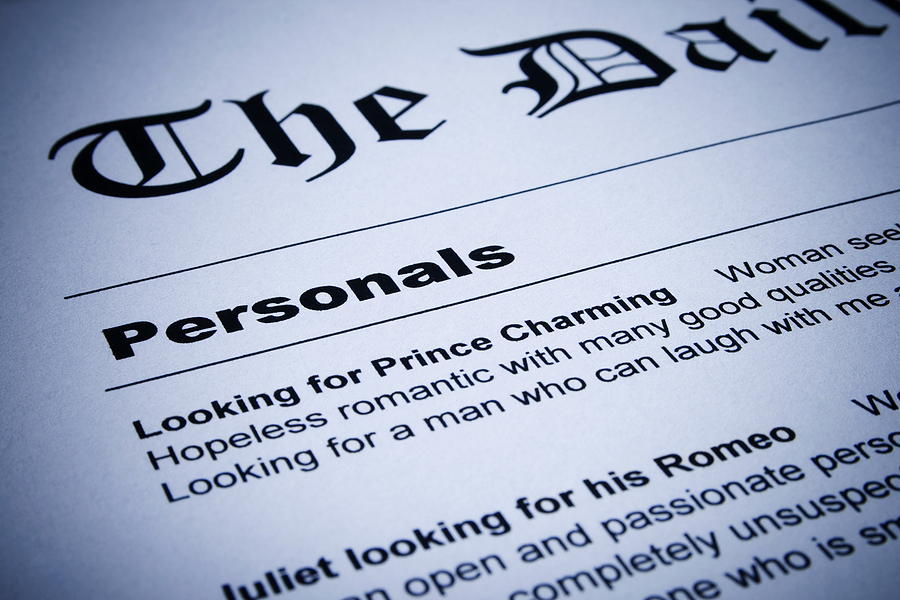 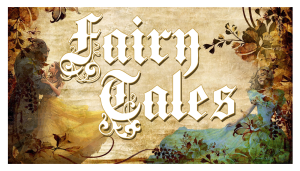 Personal ads are placed for all sorts of persuasions, but so far I haven’t seen any for those beloved characters in the stories we grew up hearing as kids.  Maybe those folks need a little help, too?

See if you can figure out who’s running these ads.  Click here for ads answers if you’re stumped. 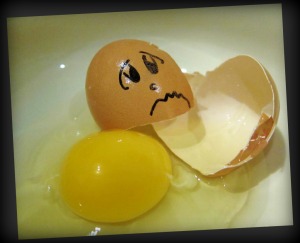 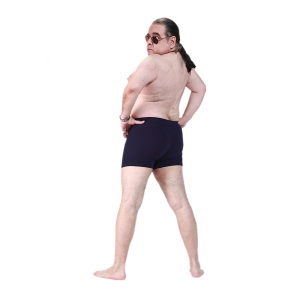 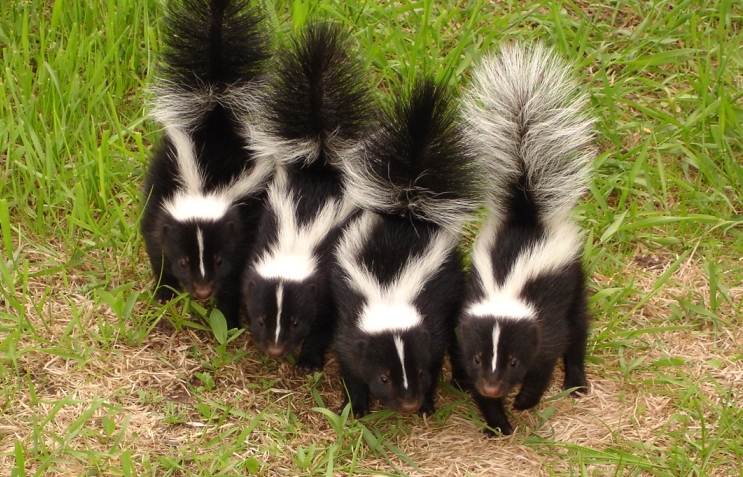 Short version:  Four skunks out of a possible four.

Nora Roberts published her first book in 1981 and our reader/writer relationship goes back almost that far.  She’s written more than 200 books, and I’ve read most of them.  All I needed was to see her name on a book’s cover and I wanted it.

Nora’s latest, Come Sundown, currently shines with 4.5 out of five stars on Amazon, and spent several weeks on The New York Times best seller list.  So I know the problem isn’t the book.

During more recent years, as Nora transitioned from romance novels to romantic thrillers, I became less and less thrilled.  Thrillers meant the introductions of all sorts of elements I wasn’t interested in:  bad guys, worse guys; sexy, stoic ex-CIA or ex-SEALS or some other ex-acronym; and often, a woman who needed rescuing from her own stupidity.

But I persevered.  This was Nora, and we go way back, after all.  You don’t just dump a long-term relationship, do you?

Plus, I’ve gotten weary of women whose translation of “interpersonal skills” is, “act like a guy.”

Which begs for Bo Peep jokes, but let’s not go there.

And actually, Bo, you’re the boss because of nepotism – your family owns the Montana ranch and gave you your job.  Kind of like Trump did for Trump Jr.  And Ivanka.  And Eric.  And Jared.

In case we forget Bo is the boss, she reminds us on page 70:

to discuss whether I approved…Then I decide on all that…”

On page 75 Bo calls a ranch hand, Cal, by his last name (very macho); on page 89 she calls him “a stupid son of a bitch” (even more macho); along the way she hits Cal and gives him a black eye, then on page 90 she threatens to kill him (OK, now we’ve gone from macho to psycho). 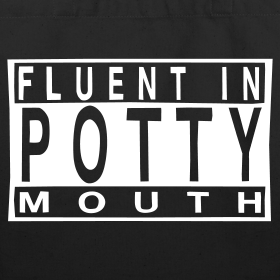 In a later conversation with Cal (page 129) Bo says “it pisses me off” (twice), “to beat the shit out of him,” and she ponders how men “irritate the living crap out of her.”

Cal, the “stupid son of a bitch” and “idiot,” is Bo’s love interest, of course.

I got as far as page 161 (out of 466) and pulled the plug after I encountered yet another of the psycho’s stream-of-consciousness.  No, not Bo; the story has a full-time psychopath, and we spend a lot of time riding his derailed train of thought.  Just a sampling from pages 160-161:

“He had a right – God given – even an obligation to procreate, to continue his line.  To

spread his seed into the world…He hit her…given her a good whack with the lug wrench…there was a lot more blood than he’d expected…she’d gone and died on him right in the back of his damn truck.”

This is not my idea of entertaining reading.  This is more like the evening news.  I don’t need to read about violence against women like this.

I see enough on TV.

At this point – where I gave up – we’ve learned that the psycho kidnapped Bo’s aunt many years ago.  He kept her chained in a cellar, and impregnated her three times.  That was then.  More recently, he’s murdered two women.  At least, I think that’s the score.

I admit my attention was wandering.  I had ceased longing for answers regarding:

Will the kidnapped aunt make a reappearance?

Will Bo and Cal become lovers, and will she continue the name calling?

So, the thrill is gone.  I just can’t face another 300+ pages of psycho violence, bodily function references, and Bo’s lack of linguistic agility.

I’m just grateful I got this book at the library and didn’t spend $28 on it.

That would have made me psycho. 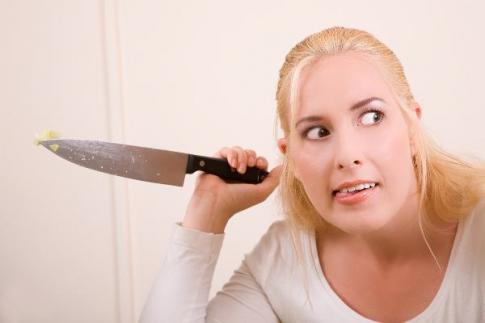