The headlines are full of stories about men behaving badly.

So it’s only fair that when a woman behaves badly, that makes headlines, too.

And the story about Megan Barry is making beaucoup headlines.

This is not only about a woman behaving badly, but stupidly.  Hence, the title of this blog.

Barry, who is married, had been involved in a two-year affair with her bodyguard, Robert Forrest, 58, also married.  As is normal nowadays, news of the affair was pretty much greeted with a big yawn from other politicians and the public.

Barry called the affair a “mistake” and vowed to continue serving as mayor.

But then Barry was accused of – and pleaded guilty to – using city funds to cover expenses incurred during and because of the affair.  Something along the lines of $11,000, which she’ll repay, while spending three years on probation.

Barry and Forrest, according to CNN, “were often partaking in domestic and foreign travel for work, which led Forrest to rack up $33,000 in expenses and $50,000 plus in overtime in 2017 on top of his $84,500 salary.  Nine of the trips were attended only by Barry and Forrest.”

Forrest also pleaded guilty and will pay $45,000 in restitution to the city, and spend three years on probation.

Apparently having an affair is OK, but asking the taxpayers to subsidize it – that’s a transgression.

Unless you’re a member of Congress.

When a member of Congress commits a transgression – like sexual harassment, for example – the Office of Compliance (OOC) pays to settle the issue.

And we taxpayers subsidize it. 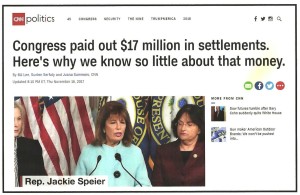 And not one member of Congress has been held accountable for whatever actions of theirs necessitated the settlements.

In other words, not one member of Congress got caught.

So Megan, if you’re going to behave like a guy, then learn what the guys have known forever:

Behaving badly at the taxpayers’ expense is OK…

As long as you don’t get caught.