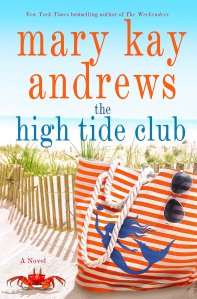 One of my writing teachers often said, “Don’t use clichés.  Express your thoughts in your words.”

Her book is crammed, start to finish, with clichés, including:

And I haven’t even touched on other highlights listed by an Amazon reviewer:  “Rape, racism, reparation, abuse, illegitimacy and white privilege are all dragged into this mess.”

Almost as abundant are Andrews’ references to bodily functions:

I especially thank Henry for sharing.

Pg 287:  “What exactly are you looking for?” Felicia asked, sitting in Josephine’s recliner,

a seat Brooke had consciously.  (Yup.  That’s how the sentence ends.)

If you’re looking for a cliché-ridden, bodily function-filled, error-permeated book and have tons of time to waste, by all means, read Andrews’ latest.

And, heck – at least Brooke had one brief flash of self-awareness.  On page 102, she whined, “I’m like some big, stupid sitcom.”

Yes, you are, Brooke.

And so is The High Tide Club.