I wouldn’t watch a beauty pageant even if I was in one.

And the chances of that are…

Beauty Pageant:  A fiasco* in which females in various age groups, from toddler and up, invite the public to objectify, trivialize, and criticize them, based on their appearance.

*Fiasco:  A thing that is a complete failure, especially in a ludicrous or humiliating way.

And that’s because of one contestant:

Since we’re both from Michigan, I’m going to call her “Emily.”

As I understand it, at some point in the pageant the contestants are given about eight seconds to introduce themselves.  Instead of highlighting her achievements, here’s what Emily, 24, said:

Wow!  When I read that the next day, did I sit up and take notice!

And so did the media:  the Washington Post, the New York Times, CNN, the BBC, People Magazine, numerous other newspapers, and network and local TV stations.

People were on Twitter, too – few doofuses, sure, but most praising Emily for using that short stretch of time to make a strong statement about her state – and herself.

Emily’s “none for its residents to drink” was referring to the water crisis in Flint, MI that began in 2014.  Flint’s tap water had become contaminated with lead after officials switched from the Detroit system to the Flint River to save money. 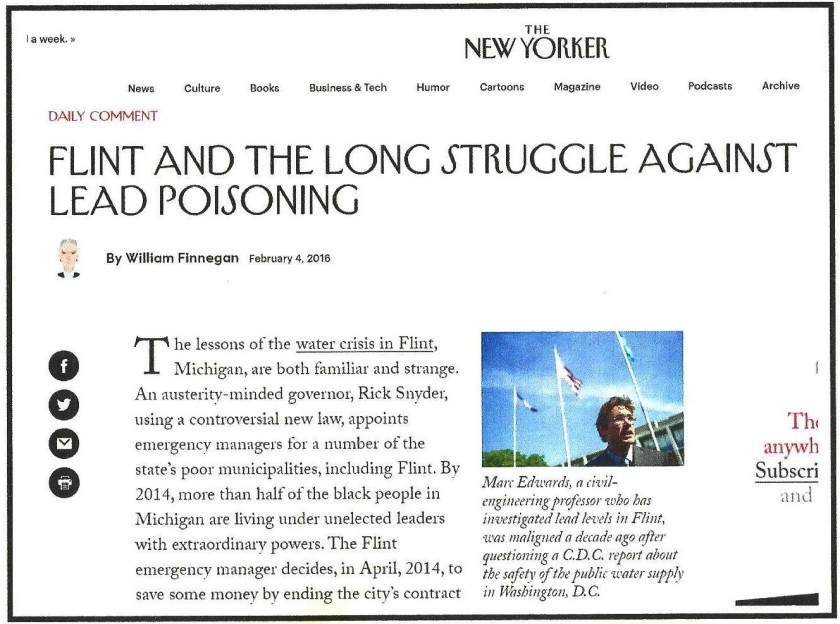 In 2014 and 2015, Flint didn’t properly treat corrosive water that was pulled from the river.  As a result, lead in old city pipes contaminated the water going into homes and

businesses, and it streamed from household taps as a brown, smelly fluid.  Some children were found to have elevated lead levels in their blood, leading to long-term health concerns.

There were tons of blame to go around:  Michigan’s Governor Snyder, the Michigan Department of Environmental Quality, the Michigan Department of Health and Human Services, the Environmental Protection Agency, and emergency managers appointed by Snyder to help the city handle its finances.   Attorney General Bill Schuette charged at least 15 people in his criminal investigation.

As of early 2017, the water quality had returned to acceptable levels, but residents were instructed to continue to use bottled or filtered water until all the lead pipes have

been replaced, which is expected to be completed no sooner than 2020.

Many residents – understandably – still trust neither the water nor the officials who are telling them their water is safe.  In the meantime, the state had been providing free bottled water to Flint residents, but that assistance ended back in April.

As Emily said, “none for its residents to drink.”

This isn’t the first time Emily has stood tall and spoken out; here she is bravely standing – alone – during her 2016 graduation from the University of Michigan, with I survived written on her mortarboard:

Emily says she was sexually assaulted twice in college, and found few resources for help.  When she was crowned Miss Michigan this past June, Emily said she hoped sharing her story of campus sexual assault will raise awareness of the issue and encourage other survivors to be proud of their recovery journey:

“I realized this is going to be a hard battle I’ll be fighting for the rest of my life, but if I don’t start now, who’s going to do it?”

And here’s Emily on Facebook on September 14, speaking out in support of VAWA, the Violence Against Women Act, due to expire September 30, and urging people to contact their reps: 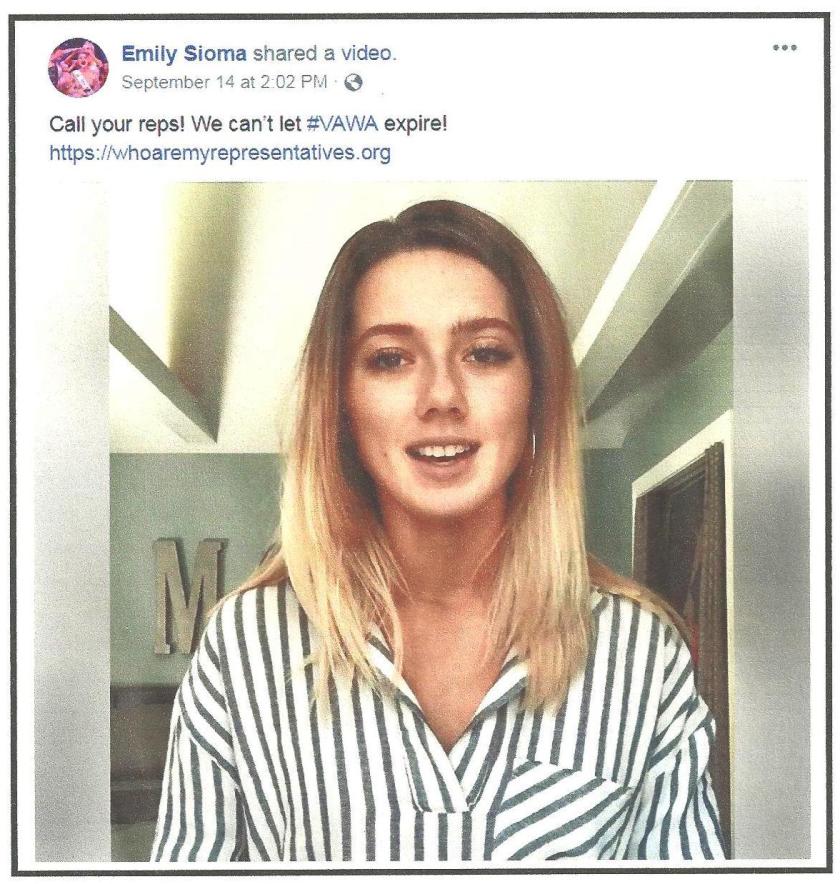 This federal legislation, aimed at protecting women from violent crimes, was granted a short-term reauthorization only until December 7 in the stopgap spending bill that was passed in September.

This year, for the first time ever, the pageant did away with the swimsuit competition.  And the organizers don’t call it a “pageant” anymore, but rather a competition with the emphasis on scholarship.

If Miss America becomes a platform for energized, intelligent women to raise their voices on behalf of those who aren’t in the spotlight, then perhaps it will suck even less.

Emily was her own woman when she walked onto that Miss America stage.  She didn’t make the top 15, but who cares?

She’s still standing tall and speaking out, and as she told Glamour magazine, “I’m just getting started.”