A joke, at about the level of whoopee cushions and plastic vomit.

There’s even a name for it:  Bathroom humor.

But then, as the story continued, I pictured myself with an exploding toilet and it quickly went from funny to unfunny.

Let’s say it happened when I wasn’t home.  Imagine the mess I’d come home to.  Like a

bomb went off in my bathroom.  Where do you start cleaning up a mess like that?

Or suppose I was home.  Even if I’d had the TV on or the earbuds in, I would have heard something very damn scary.  Was someone breaking into my house?  Had my house been hit by something falling out of the sky?

Then I’d discover, no – no break-in, no meteorite.  But what a mess.

But then suppose – suppose I’d been in the bathroom when the toilet exploded.  I’m picturing sharp, lethal shards of porcelain and metal flying everywhere, including at – and into – me.

And according to the stories, that has happened:  at last count 23 people injured, one requiring surgery.

Close to $1 million in property damage.

Not funny at all.

It turns out that the exploders are pressure-flush toilets, vs. the gravity-flush toilets that we’re more familiar with, the latter having been around for more than a century.

The pressure-flush toilets are the Flushmate II 501-B, which Flushmate discontinued in 2013.  The company says it’s received 1,453 reports in the U.S. and Canada of the units bursting.

I can’t help but wonder how long those reports have been coming in – and why we’re only now hearing about it.

But wait – we’re not only now hearing about this.  Check out these headlines from 2012… 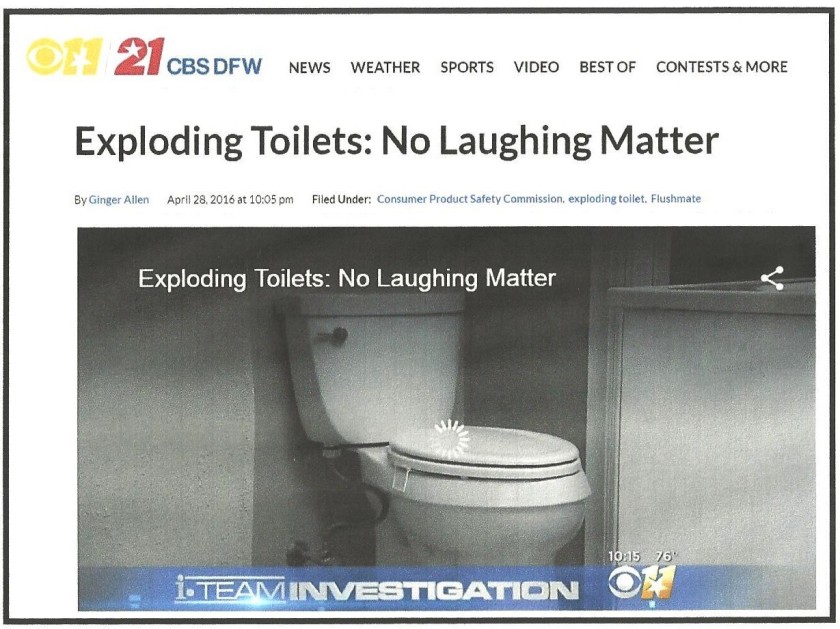 Oh, yeah.  Flushmate has been having serious problems for years, and so have its victims.

So serious that in 2014 Flushmate “agreed to pay $18 million to resolve multiple class action lawsuits”:

And I have to believe the company knew about the issues with the Flushmate II 501-B, since they stopped making it in 2013. 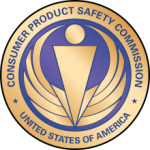 We have a government agency, the Consumer Protection Safety Commission (CPSC), that’s “charged with protecting the public from unreasonable risks of injury or death associated with the use of the thousands of types of consumer products under the agency’s jurisdiction.  Deaths, injuries, and property damage from consumer product incidents cost the nation more than $1 trillion annually.”

And CPSC has dutifully posted a Flushmate recall notice on their website, dated October 18, 2018:

Considering the injuries that have happened since 2012, and the potential for more “unreasonable risks of injury or death,” wouldn’t you think maybe just one of the 500 CPSC employees might pick up the phone, call the company and say, “Flushmate, we have a problem”?

So here’s where we are:

Flushmate estimates there are almost 1.5 million Flushmate II 501-B exploders – I mean systems – in the U.S. and Canada, and the company is telling people to “turn off the water supply to the toilet and flush the toilet to release any internal pressure.”

And then, says Flushmate, “We are communicating with customers who may still own the product to offer a free Flushmate replacement unit and installation by a technician.”

So if I have a Flushmate II 501-B system, I’m supposed to go toilet-less until their technician shows up?

Fortunately, there are no Flushmates in my home.

What’s in your bathroom?