I’ve heard more than one police officer say, “The reason some criminals get caught is because they make a mistake.”

Now, we all make mistakes.

Lest you think the numbnuts definition at the top of this blog is harsh – well, read about these folks and see if you agree.

If you’ve ever left home without your driver license you know how annoying that can be.

That was not a concern for Wesley Glenn Bost, 27, of Birmingham, AL, when he left home late last year.

Yes, Wesley had his license in his pocket when he went into the local Waffle House.  Whether or not Wesley indulged in waffles is not known, but at some point Wesley headed for the restroom.

Once inside, he took off his pants and used them to tie the door shut.

Let’s think about that for a minute.

If you went into a place of business with nefarious intentions, and knew you needed to secure a door, wouldn’t you bring along a rope or a bungee cord or something to facilitate that?

You probably would.  Hence, you won’t be featured in Numbnuts In The News.

And why did Wesley have to tie the door shut?  Restrooms in restaurants have locks, right?

After securing the door, pantless Wesley climbed into the ceiling, apparently with the intention of using this route to reach the restaurant office, and then rob it.

However, en route to the office, Wesley fell through the ceiling:

I imagine the site of pantless Wesley falling through the ceiling put at least a few people off their smothered hash browns.

Wesley escaped, but remember his pants?  With the driver license in his pocket?

The police found his ID, and they’ll find him, too.

I suggest they try nearby Marshall Space Flight Center in Huntsville, AL where I’m betting Wesley is – no surprise here – a rocket scientist.

Right around the same time, in Gulfport, MS, Keith Rio Cavalier, 28, was simply trying to do his civic duty:  Report a crime.

Instead of using the phone or waving down a police car, Keith decided on a unique approach:

He crashed his pickup truck into the front of the Harrison County courthouse: 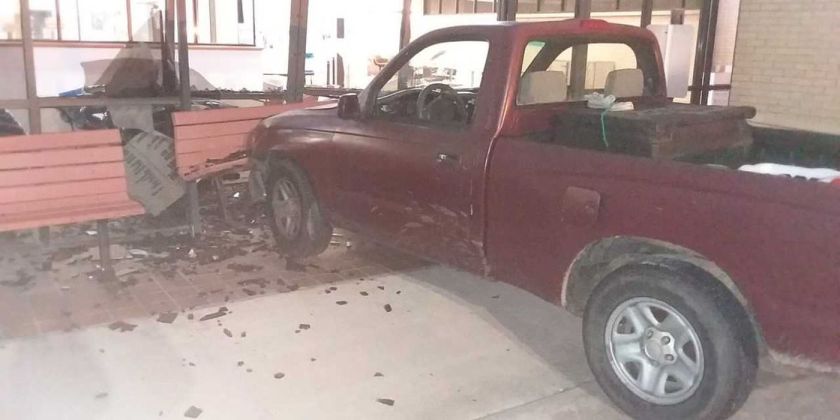 The courthouse, of course, has exterior cameras, and the 50-second video shows the truck driving across the sidewalk and into the courthouse, shattering plate glass.

Unable to open his door, Keith lowered a window and climbed out of the truck: 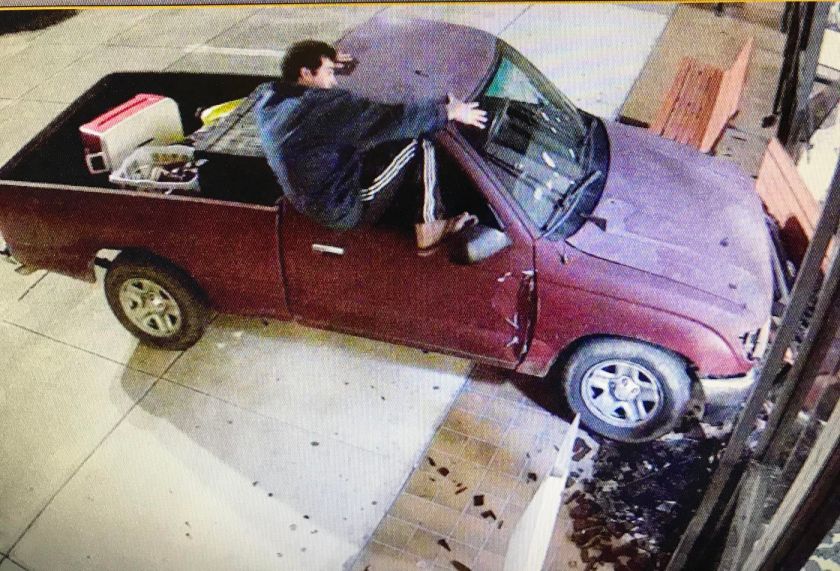 Keith casually strolled off (but not out of camera view), then turned and paused in a – if I may say it – rather cavalier fashion, and surveyed the scene.

No doubt at this point he was thinking, “That will get the cops’ attention.”

And indeed, it did.  The police apprehended Keith shortly after the incident and charged him with first-offense DUI and felony malicious mischief.

Wisely, Keith took advantage of his proximity to the police to report the original crime, just as he’d intended:

Someone had stolen his drug paraphernalia.

Let’s think about this for a minute.

If someone stole your drug paraphernalia, would you report it to the police?

You probably wouldn’t.  Hence, you won’t be featured in Numbnuts In The News.

What was Keith’s motive?  To help the police catch the person who stole

the paraphernalia, and return the stuff to Keith?