I’ve done more than 30 book reviews on my blog and a half-dozen movie reviews.

I wrote one of those movie reviews – about Isn’t It Romantic – without ever seeing the movie because I knew I’d hate it.

But I did read every one of those books.  The few I didn’t finish, I read enough to form an

Now I’m going to do a book review without reading the book.

I hadn’t even contemplated reading the book.  The first time I read about it on Amazon, I thought “Nope,” and moved on.

Then I noticed that the book – Where The Crawdads Sing – was on The New York Times best seller list.

That’s significant to me.

And I started wondering, “What am I missing here?”

I wanted some background, so I googled Crawdads and first up was this March 17 story on CBS Sunday Morning that described the books as “a phenomenon”:

And since the author, Delia Owens, is now 70 and had never written a novel before, I’d say “phenomenon” is not a stretch.

And more praise in this January article in Britain’s The Guardian:

The article’s author gushed over Crawdad being “boosted by the cherished trinity of New York Times bestsellerdom, a frenzied foreign sales fight, and a film in development by Reese Witherspoon (her online book club picked the novel in September 2018).”

Did the authors of these articles read the book?

Because I know who did:  Amazon reviewers. 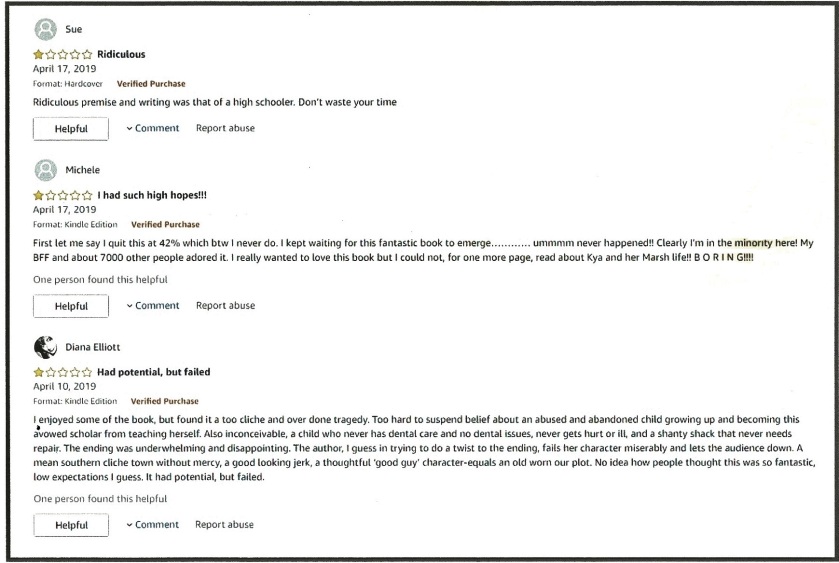 To be fair – admittedly not a great concern of mine – only 2% of the reviews were one star.  A whopping 86% were five-star reviews.

That 86% is an overwhelming number, and gave me pause:  What’s the likelihood of them being wrong and me being right?

So maybe…shouldn’t I at least read an excerpt, to see what those reviewers are raving about?

GoodReads offered a slew of excerpts, including this one, apparently about firefly mating habits:

Suddenly Kya sat up and paid attention:  One of the females had changed her code.  First she flashed the proper sequence of dashes and dots, attracting a male of her species, and they mated.  Then she flickered a different signal, and a male of a different species flew to her.  Reading her message, the second male was convinced he’d found a willing female of his own kind and hovered above her to mate.  But suddenly the female firefly reached up, grabbed him with her mouth, and ate him, chewing all six legs and both wings.

And this, I guess a bit of Kya’s overwrought wisdom:

I must let go now.  Let you go.  Love is too often the answer for staying.  Too seldom the reason for going.  I drop the line and watch you drift away.  All along you thought the fiery current of your lover’s breast pulled you to the deep.  But it was my heart-tide releasing you to float adrift with seaweed.

And finally – I guess an explanation for the book’s title:

Tate said, “Just means far in the bush where critters are wild, still behaving like critters.”

Will I read Where The Crawdads Sing?

After as I actually hear crawdads sing.