That’s what’s wrong with this picture.

And all you have to do to get our country’s highest civilian award is win a golf tournament.

I won a Tiddly Winks tournament once – would that qualify me?

Well, then, what are the qualifications?

The Presidential Medal of Freedom was established in 1963 by President John F. Kennedy.  Recipients are selected by the president, either on the president’s own initiative or based on recommendations.

The prestigious award isn’t limited to U.S. citizens, and in the ensuing 56 years nearly 600 people have been recipients.

The Presidential Medal of Freedom recognizes individuals who have made “an especially meritorious contribution to the security or national interests of the United States, world peace, cultural or other significant public or private endeavors.”

I’m not getting how Tiger Woods qualified for this.

Oh – maybe it was that “private endeavors” thing?

And in late 2009 we started hearing just how many private endeavors.  After that crazy car crash near his home, it was like a dam burst – and we were flooded with stories of Woods’ affairs with multiple women, including but not limited to the following:

Woods was also plagued by health issues.  I think golf looks like a simple game for wimps, but even I know that at Woods’ level it can be brutally hard on the body.  He had multiple surgeries, and kept playing in tournaments.

And kept going home with a big “L for Loser” on his forehead.

Home, that no longer contained his wife, Elin, and their two children.  She divorced him in 2010, took the kids and the money, and ran.

His sponsors ran, too.

How low can you go?  Woods was there.

Then came April 2019, and Woods won – WON! – the Masters in Georgia.  Suddenly, everyone wanted to be his friend again.  Headlines hailed his “comeback”:

And in May, the president gave Woods the Presidential Medal of Honor.

From one serial adulterer to another.

Since Woods’ big win there’s been lots of buzz in the media about “redemption,” though how winning a golf tournament “redeems” the pain and humiliation Woods inflicted on his wife and family is a mystery to me.

I agree – people can, and people do.

But a leopard doesn’t change his spots.  And…

If you, too, would like to get a Medal of Freedom but don’t play golf, consider writing a flattering book about the president.

Arthur Laffer, co-author of Trumponomics:  Inside the America First Plan to Revive Our Economy, is slated to receive the Medal of Freedom on June 19. 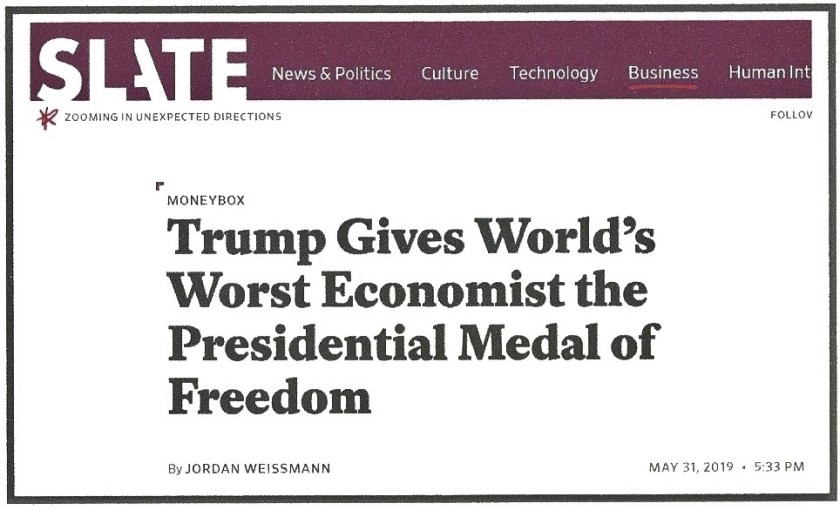