I was watching the PBS NewsHour on the evening of Trump’s recent rally in Orlando, when they teased an upcoming story about the rally and the above image appeared.

Is that our U.S. flag with an image of a thumbs-up Trump embedded in it?

With “Making American Great Again” across the bottom?

I have never heard of, or seen, or imagined anyone desecrating our flag in this manner.

As I sat there, stunned, that same image appeared at 39:58 into the program:

My feeling was, “How could PBS show not once, not twice, but three times an image that so politicizes our flag?”

And, “How could that person at the rally politicize our flag like that?”

It turns out, whoever was displaying that flag didn’t have to do it themselves.

The flag is “Dye-sublimated with beautiful bold colors” and “Printed on one side all the way through the fabric,” and I’ll bet it’s made in a foreign country.

A country which may be familiar with, but is paying no attention to, the U.S. Code, Section 8, Rule g, “Respect for flag”:

I went online to see if any of the media coverage mentioned it, and found this image on Politico.com:

And this variation on PBS online, Aljazeera and no doubt elsewhere: 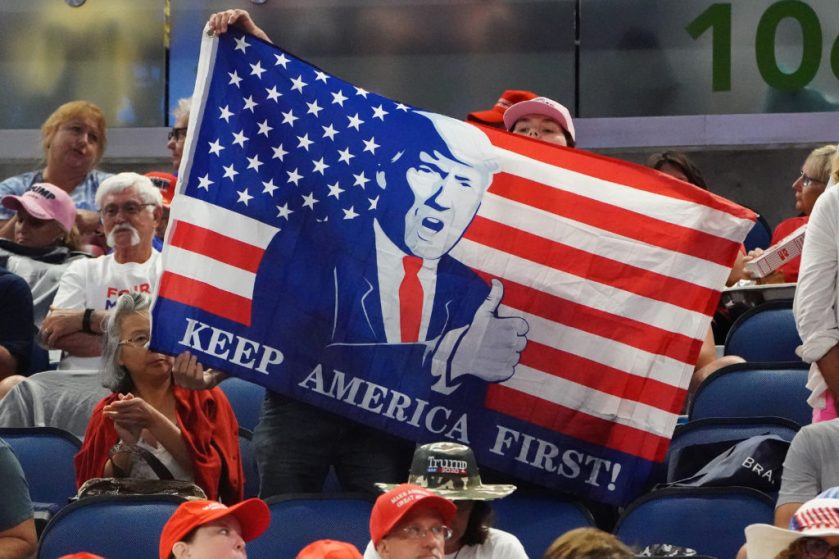 Further online searching brought me only one other similar flag-altering incident, on Snopes.com from back in 2012.  Someone had asked,

Is this a real flag with Obama’s picture on it or merely a photo-shopped picture for negative publicity?  Was it really flown over Democratic headquarters in Lake County?

Origins:   This image of a U.S. flag flying in conjunction with another U.S. flag in which the traditional fifty stars in the blue canton have been replaced with an image of President Barack Obama came to public attention in March 2012.  The latter flag had been flying for several months over the headquarters of Florida’s Lake County Democratic Party but was taken down on 13 March 2012 after complaints from veterans.

Why aren’t those veterans complaining now?

Why isn’t anyone complaining…