For a few days in late July, this story was all over the news:

Here’s the image that goes with the headline:

I read many online versions of the story and they were consistent:  One Dollar Zone, a regional chain, had stocked the dolls in their Bayonne, NJ store , but removed them after shoppers raised concerns, especially that the dolls were racist.

Called a “Feel Better Doll,” they were black, with red, yellow and green yarn hair, and came with these instructions attached to the doll:

Whenever things don’t go well and you want to hit the wall and yell, here’s a little “feel better doll” that you just will not do without.  Just grab it firmly by the legs and find a wall to slam the doll, and as you whack the “feel good doll” do not forget to yell I FEEL GOOD.  I FEEL GOOD

Below that were website and email addresses for Harvey Hutter, a company no one in the media could reach, and had apparently gone out of business.

Ricky Shah, the president of One Dollar Zone, said the inappropriate dolls making it to shelves was an oversight.  “One Dollar Zone deeply apologizes for this incident,” he said.

The black rag doll story was in the headlines for a few days, then faded from view.

And that’s too bad, because this isn’t only a story about the doll.

One of the online articles included a link to the Facebook page of Bayonne’s mayor, Jimmie Davis, on this subject:

It was the posts that followed that troubled me as much as the doll itself.  There were very strong responses from two very different points of view, and as I read them I felt almost overwhelmed at how divided our country is.

Below is a sampling of the posts that I grouped together in terms of sentiment: 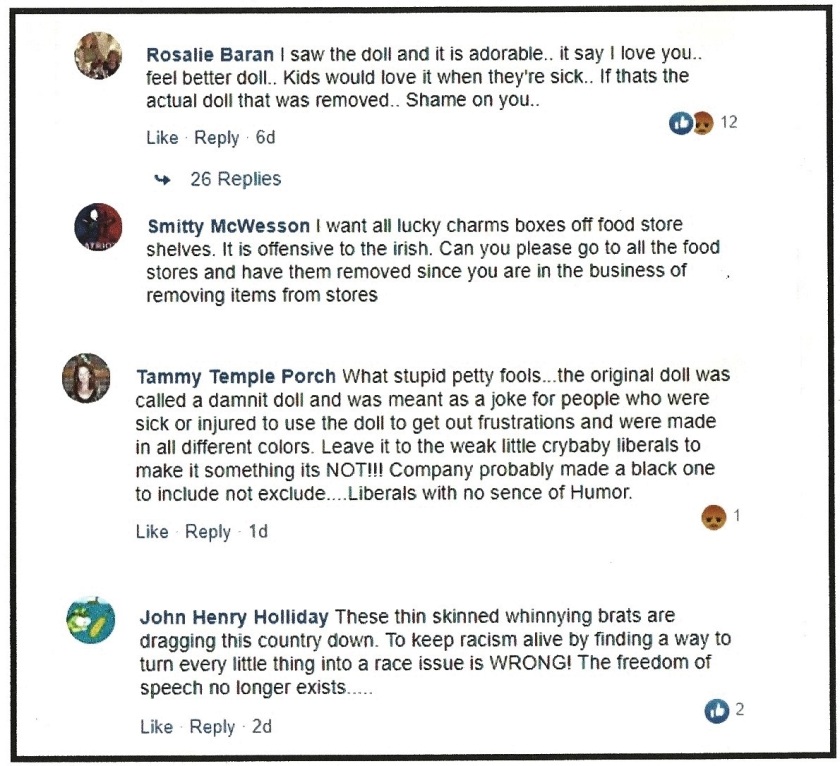 When did we get so divided?

Yes, we’ve always been a country of strong opinions – and even before we were a country.  The pre-Revolutionary War colonists fought and argued among themselves, but united enough to fight against their common enemy, Great Britain, and win our independence.

And we’ve always been a country of different opinions:  To enter World War I or not?  To allow big monopolies or not?  To install a stoplight at that intersection or not?

Pick any topic and we’ll have opposing opinions, and we feel free to express them.  And that’s a good thing.

But we’re different now.  Issues we used to talk about – now, we fight about.  If you’re not with me, you’re against me.

Everything has turned into black and white with no gray areas, and no interest in even seeing if there is a gray area.

When did we get so divided?

When Trump was elected.

Because while Trump isn’t smart, and he isn’t well-read, and he’s certainly no student of history, he has mastered a tactic that’s been around for thousands of years:

Even in his ignorance – which is endless – Trump knows that the “divide and conquer” tactic has been around for so long because it works.

What is “divide and conquer”?

Where does the black rag doll story fit in?

That story – and the no-gray-area opinions – are a microcosm of Trump’s use of divide and conquer:

Author Robert Reich said it better than I ever could:

Trump has forced all of us to take sides, and to despise those on the other.  There’s no middle ground.

It’s the divide-and-conquer strategy of a tyrant.

Democracies require sufficient social trust that citizens regard the views of those they disagree with as worthy of equal consideration to their own.  That way, they’ll accept political outcomes they dislike.

Trump’s divide-and-conquer strategy is to destroy that trust.

Nothing could be more dangerous to our democracy and society.