The name “E. Jean Carroll” came and went from the headlines.  But I think her story – and the larger story – are worth remembering.

In late June she was suddenly all over the news:

I’d never heard of her, though she’s written several books and says, “I write the ‘Ask E. Jean’ column in ELLE magazine.  It is – astonishingly – the longest, currently-running advice column in American publishing.”

But Carroll wasn’t suddenly newsworthy for her column or books, at least, not directly.

It was because she claimed she’d been sexually assaulted by Donald Trump.

Carroll had added her name to the list of women who have accused Trump of sexual assault or unwanted advances. 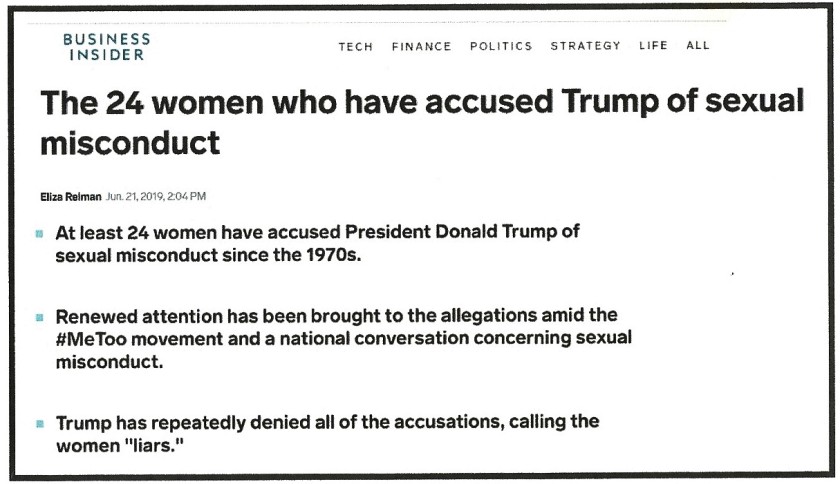 Trump, of course, has denied all the women’s accusations, including Carroll’s.

But it’s not Carroll’s claim or Trump denying it that still confounds me.

So, what was he saying?  If Carroll was his “type,” he would have assaulted her?

That he assaults only women who are his “type”?

The Carroll situation was not the first time Trump disparaged the appearance of an accuser.

In 2016, Jessica Leeds claims Trump grabbed her breasts and tried to put his hand up her skirt during a flight to New York in the early 1980s.

Trump’s response:  “Believe me, she would not be my first choice.”

Also in 2016, Natasha Stoynoff, a former writer at People, said that in 2005, Trump shut the door after they walked into a room together, and “within seconds he was pushing me against the wall and forcing his tongue down my throat.”

What, I wondered, is going on with the “She’s not attractive enough to assault” statements?

And, I wondered, will the media pick up on this heinous statement?

The “too ugly to rape” defense is one many perpetrators use to undermine victims, and sexual-assault experts say it feeds into the public’s misunderstanding of how sexual violence works.

“We see that babies to women in their 90s are raped,” said Sarah Cook, associate dean at Georgia State University Honors College, a nationally recognized expert on violence against women and a survivor of sexual assault.  “Rape isn’t about sexual attraction.  Rape is about the expression of power through sexual behavior.”

Sexual assault is never about a woman’s beauty, experts say, but is a unique form of control used to shame, demean and defile victims.  And it can happen to anyone, regardless of their appearance, age or what they’re wearing.

“There are so many different portrayals of rape in our society, and many of them feed our stereotypes that rape is about sexual attraction, that you have to be absolutely beautiful, stunning, to be raped,” said Karen Weiss, a sociology professor at West Virginia University and an expert on sexual victimization.  “But the reality is, all of us are vulnerable.”

By claiming he isn’t attracted to these women, Trump represents sexual assault as driven solely by desire for another person rather than what it really is:  a violent action driven as much as by a need to exert power as any kind of attraction.  Referring to attractiveness reframes an assault and puts it in the same language we use to talk about consensual romantic and sexual encounters.

By discussing her attractiveness, Trump also shifts attention from what we should be talking about:  whether or not he sexually assaulted Carroll in the 1990s.  Now, he has shifted the conversation to focus on an assessment of the alleged victim’s appearance and whether she was “attractive enough” to be chosen as his victim.  Sexual assault becomes a compliment bestowed only on attractive women, and Trump is able to further objectify women as he denies the sexual assault allegations.

In working with sexual offenders, the World Health Organization (WHO) found that sexual desire isn’t the motivator for sexual violence.  “Although sexuality and aggression are involved in all forms of sexual violence, sex is merely the medium used to express various types of non-sexual feelings such as anger and hostility towards women, as well as a need to control, dominate and assert power over them,” according to WHO.  “It is rather a violent, aggressive and hostile act used as a means to degrade, dominate, humiliate, terrorize and control women.  The hostility, aggression and/or sadism displayed by the perpetrator are intended to threaten the victim’s sense of self.”

In that sense, turning around and calling the accuser unattractive is another attempt to humiliate her.

There is, as always, a certain clarity to Trump’s cruelty.  The president seems to understand, on some level, something profoundly true about the creaking mechanics of misogyny:  Sexual abuse is not, ultimately, about sexual attraction.  It is about power.  It is about one person’s exertion of will over another.  In this way, “She’s not my type” is deeply entangled with the president’s long-standing habit of dismissing unruly women through his negative assessments of their attractiveness:  the women as the sexual commodities, Donald Trump as the discerning consumer.

It’s not just with accusers that Trump lets loose his fusillade of insults:

These New York Times writers compiled what I know was only a short list of women Trump “has attacked by demeaning their looks, mocking their bodily functions or comparing them to animals.”

Carly Fiorina, 2016 Republican presidential candidate:  “Can you imagine that, the face of our next president?”

Katarina Witt, a German Olympic figure skater, would be considered attractive only “if you like a woman with a bad complexion who is built like a linebacker.”

Omarosa Manigault Newman, former aide and author of a tell-all book, Unhinged:   Trump called her “that dog” and a “crazed, crying lowlife.”

Cher, in 2012, over her criticism of Republican candidates running for office:  She should “stop with the bad plastic surgery and nasty statements.”

Kim Novak, actress, while Trump was watching the 2014 Oscars:  “The last song was terrible!  Kim should sue her plastic surgeon!”

So Carroll has lots of company.

E. Jean Carroll flashed across our awareness like Halley’s Comet, but she won’t have the comet’s staying power.

She’ll be replaced by the next woman who publicly claims sexual harassment or sexual assault by Trump.

Trump will deny her claim and denigrate her.

Unless we change it: