If you enjoy English royalty historical fiction – the Plantagenets, the Yorks, the Lancasters, their predecessors, their successors – I highly recommend author Anne O’Brien.

But also, on herstory.

Here are the 10 O’Brien books I’d read, and the women whose story the books tell.  I’ve enjoyed them, learned from them, and recommend all of them:

Now we have #11, O’Brien’s latest:  A Tapestry of Treason, that tapestry woven by the York family.  On her website, O’Brien describes the family as “magnificently dysfunctional,” and they were. 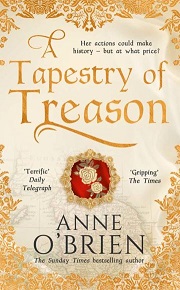 O’Brien’s focus is Constance of York – daughter of Edmund of Langley, Duke of York, and granddaughter of Edward III.

Born circa 1375, Constance had an older brother, Edward, and a younger brother, Richard.  When the book begins in 1399, she is married to Thomas, Earl of Gloucester.  Constance was very aware of – and proud of – her family’s royal blood, and her place in that family, their power and their connections.

There’s a tangle of many cousins – both legitimate and illegitimate grandchildren of Edward III – that can be challenging to keep track of, but O’Brien handles it deftly.  Equally deft was her giving Constance the first-person narrator role, so we get some insight into Constance’s thoughts, and motivations for what she did.

And, oh – what Constance did.  I found myself thinking, “No!  Constance!  Don’t do this!” but that’s because I had the benefit of having read about Constance before, and knew it would go badly.

Constance was an intelligent adult, and could be as arrogant, ambitious and grasping as the men around her.  She could also be tactless, cruel and self-centered.

I found her fascinating.

Because of her rank, Constance was able to make some of her own choices in an age when most women had none.

But choosing treason?  Not once, but twice?

She was fortunate to keep her adult head on her shoulders.

Two of the power-hungry men in Constance’s life were her cousin Henry, son of John of Gaunt; Gaunt was Duke of Lancaster and third son of Edward III.  Henry usurps the throne of Richard II and becomes King Henry IV, and when this happens, the York family – which had been loyal to Richard II – must suddenly switch their loyalties to Henry IV.

The other man is Constance’s older brother Edward, who was charming, brilliant, and a traitor, schemer, liar, and ambitious self-seeker.  But Edward took it to another level, betraying both his king, and his sister.

Toward the end of A Tapestry of Treason, here’s Constance, looking back on her life:

I closed my eyes, seeing the tapestry of connections that I was stitching.  Had I not, for much of my adult life, been at the centre of a tapestry of treason, drenched in blood and death?  I had stitched with my own hands and intellect to undermine and destroy.  In my mind’s eye I could see each interlocking stitch, the interplay of colour and vibrancy.  There would be no redemption, no forgiveness for me in its creation, even though it had never come to pass.

In was during Constance’s era that the seeds were sown for what is often referred to as “The Wars of the Roses.”  Awhile back I learned that that phrase is attributed to a man who lived 300+ years later, Scottish novelist Sir Walter Scott (1771-1832).

I think that phrase is such a misnomer.  It romanticizes what was a series of bloody civil wars in mid-15th-century  England that lasted almost 30 years, fought between people who were blood relatives – descendants of that tangle of cousins of York (white rose) and Lancaster (red rose).  The phrase “The Cousins’ Wars” is also used, less frequently, but more accurately.

If you’re interested in the Yorks’ role in the opening act of The Cousins’ War – and in Constance’s herstory – I highly recommend The Tapestry of Treason.