Recently I was reading an article, then stopped and thought, “Didn’t I just read this the other day?  Are they running the same story again?”

Two states, with a common thread,

From the Slate article about Wisconsin:

“…in a massive purge that would disproportionately affect minorities and Democrats.  The decision rests on a dubious interpretation of Wisconsin law pushed by a conservative group that seeks to weaponize state records against left-leaning voters.  If upheld, the ruling could increase Donald Trump’s chances of winning the closely divided state in 2020.”

From the article about the Georgia purge by the nonprofit Common Dreams, a quote from the advocacy group All Voting is Local:

“Voter purges pose a distinct threat to our democracy, causing disproportionate harm to the very voters who have long been disenfranchised:  people of color, low-income voters, and those who move frequently.”

Wisconsin and Georgia purging so many voters in such a short time frame is new, but purging voter rolls is not.

In August, the Brennan Center, a non-partisan law and public policy institute, published this: 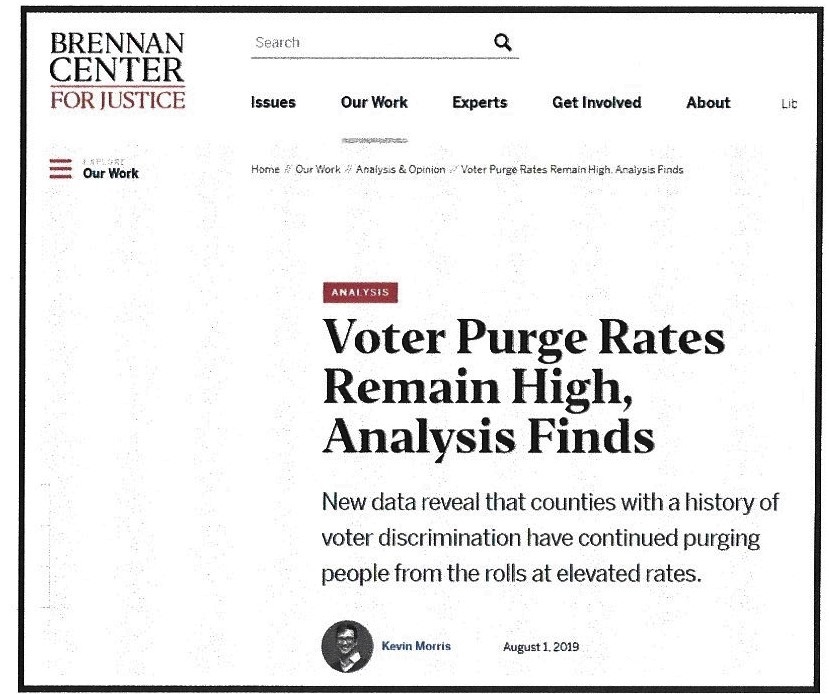 “The Brennan Center analysis found that between 2016 and 2018, counties with a history of voter discrimination have continued purging people from the rolls at much higher rates than other counties.”

“This phenomenon began after the Supreme Court’s 2013 ruling in Shelby County v. Holder, a decision that severely weakened the protections of the Voting Rights Act of 1965.”

What is Shelby County v. Holder?

I found this article in The Atlantic very enlightening:

“In that 2013 decision, the Supreme Court invalidated a decades-old ‘coverage formula’ naming jurisdictions that had to pass federal scrutiny under the Voting Rights Act, referred to as ‘preclearance,’ in order to pass any new elections or voting laws.  Those jurisdictions were selected based on their having a history of discrimination in voting.”

So, jurisdictions that had a history of discrimination in voting had to pass federal scrutiny before they passed new voting laws.

But the Supreme Court did away with that, and that unleashed a firestorm of voter purging that began in 2013 and has steadily increased.  According to the Brennan Center article:

And the purging has been surging ever since – this from the Brennan Center article:

“The latest data from the Election Assistance Commission shows that between the presidential election in 2016 and the 2018 midterms, more than 17 million voters were purged.”

And when your name is purged, you may or may not know about it.  You’ll go to your polling place, and be denied your right to vote.

Now, purging voters for the right reasons is not only legal, it’s mandated by law.  If someone moves out of state or dies, of course their names should be removed.

But there’s another reason voters are being purged, one I find especially pernicious.  Take, for example, in Georgia.

Where voters are being denied their right to vote simply because they haven’t voted for awhile.

According to a December 17 CNN story,

“The removal comes as part of a new state provision signed into law earlier this year.  Under the provision, the state must remove registration records from the voter rolls that have been deemed ‘inactive’ for more than three years.  A voter is categorized as ‘inactive’ if they don’t vote in two general elections and have had no contact with board of elections in that time.”

“Signed into law earlier this year.”

Now imagine that you live in Georgia and you haven’t voted for awhile.  You haven’t moved, you haven’t died, and you’re on your way to vote in the next election.

You arrive at your polling place only to be told, “You’re not on our list of registered voters.”

Georgia’s CTA (Cover Thy Ass) move was sending a pre-addressed, postage-paid confirmation card that asked voters to confirm or update their information.  The “inactive” voters were marked for removal after failing to respond to a within 30 days.

But suppose the card didn’t make it to its destination?  The Postal Service has been known to misplace, misdirect, or inadvertently shred our mail a time or two.  More like a

Or suppose you dutifully completed the card and dropped it in the corner mailbox, and the Post Office misplaced, misdirected or inadvertently shredded it.

Or supposed that confirmation looked like junk mail – which it probably did – and who has time to wade through the pile of junk that shows up in our mailboxes every day?

Whatever occurred, in Georgia you can be denied your right to vote only because you haven’t voted for several years.

“In our view, it is a First Amendment right not to vote, and it is unconstitutional to take away a Georgian’s right to vote simply because they have not expressed that right in recent elections.”

So here’s where we are.

Between the presidential election in 2016 and the 2018 midterms, more than 17 million voters were purged.

And according to this article: 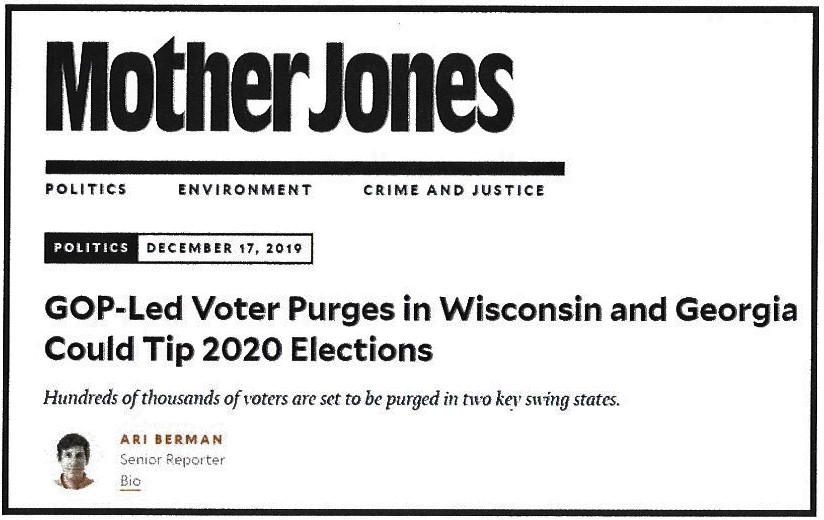 December 13:  A state judge in Wisconsin ruled that the state could begin canceling the registrations of 234,000 voters – seven percent of the electorate – who did not respond to a mailing from election officials.

December 16:  The Georgia Secretary of State removed 309,000 from the rolls – four percent of the electorate – whose registrations were labeled inactive, including more than a hundred thousand who were purged because they had not voted in a certain number of previous elections.

Mother Jones did the math:

“These numbers are large enough to swing close elections.  Donald Trump carried Wisconsin by 22,000 votes; the number of soon-to-be purged voters is more than 10

times his margin of victory.

“Democrat Stacey Abrams failed to qualify for a runoff against Brian Kemp in the 2018 governor’s race by 21,000 votes; the number of purged voters in Georgia is 14 times that.”

And – no surprise – here’s that word “disproportionately” again:

“These purges appear to disproportionately affect Democratic-leaning constituencies, including voters of color, students, and low-income people who tend to move more often.”

Now let’s you and I do the Election Day math. 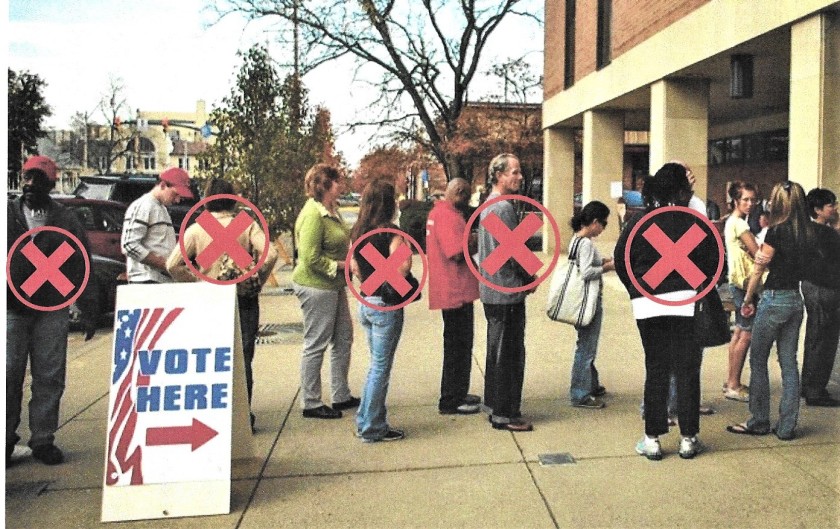 Here’s an earlier story from October, one that didn’t get the attention that the Wisconsin and Georgia voter purges got, but is sickeningly similar: 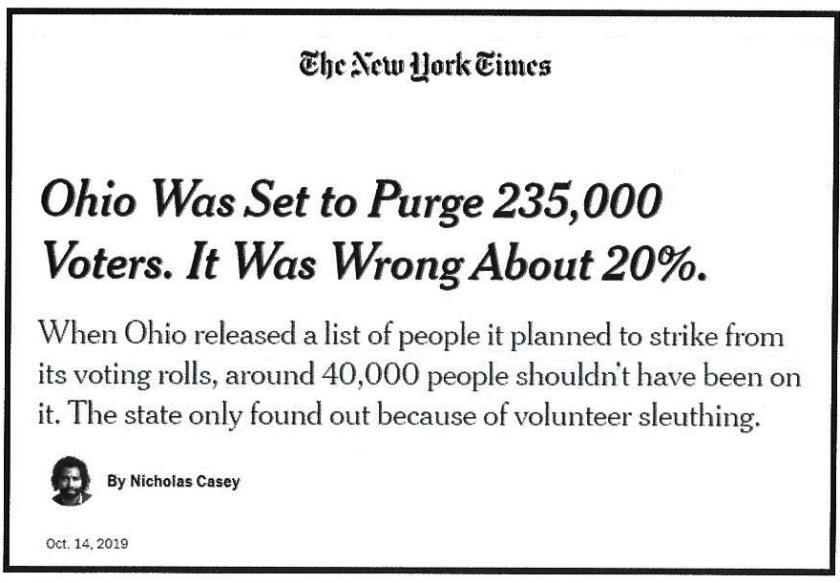 According to the article, this past summer a group of elected officials in Ohio, mostly all moderate Republicans, decided that rather than purge the voter rolls behind closed doors as had been done in the past, the government would release the full list of 235,000 voters to be purged, and give the list to advocacy groups.  And…

“The groups said they found the list was riddled with errors.

“The result:  Around 40,000 people, nearly one in five names on the list, shouldn’t have been on it, the state determined.”

Jen Miller, the executive director of the League of Women Voters.

Miller got the list of 235,000 names and found her name on the list, flagged as an inactive voter.

“I voted three times last year,” said Ms. Miller.  “I don’t think we have any idea how many other individuals this has happened to.”

And there’s this more recent story:

It says, in part,

“Democrats and liberal advocacy groups…are worried that their voters are hurt the most by these cleanup efforts.  That’s because low income, minority and young voters do tend to move around a lot.  So they are disproportionately affected.”

How many more?  I think this opinion piece in the December 18 Washington Post put it well:

The article says in part:

“Many states operate on a use-it-or lose-it principle:  If you haven’t voted in a couple of elections, the state sends you a notice, and if you don’t respond, they strike you from the rolls.  Then the next time you show up to vote, you find that you’re no longer registered.

“Republicans deny that they have any partisan motives; they claim that voter purges are just a way of cleaning up the rolls.  But we all know the truth:

“If purges didn’t work to suppress Democratic votes,
Republicans wouldn’t be so eager to do them.” 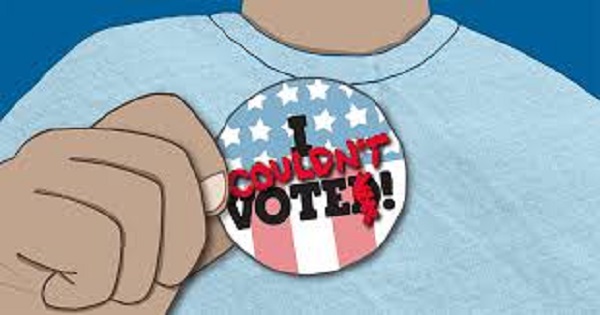