When the TV is on, I’m usually – at most – paying half-attention to it.

I might be reading, or doing something in the kitchen.  (No, not cooking.  You’re confusing me with someone else.)

It was one of those happen-to-glance-up times that I saw this guy licking Tina Fey’s face: 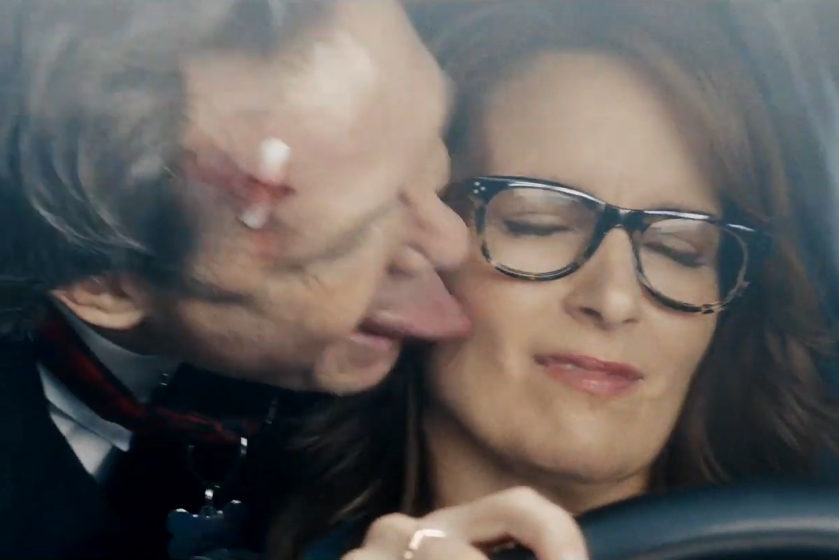 Who is this guy?

And why was he licking Fey’s face, and then picking up her purse with his teeth and shaking out the contents?

What I was seeing was so awful that the advertiser, and the product being advertised, completely missed my radar.

What was that a commercial for?

And why was Fey – one of my heroes – allowing that guy to lick her face?

My perception of Fey is that she’s smart, funny, and something of a trailblazer.  She joined the writing team of Saturday Night Live in 1997, when writing for TV was still very much a male bastion, and eventually became the show’s first female head writer.

She began appearing in SNL sketches, including the coveted spot as co-host of Weekend Update, while she continued as head writer.  She left the show in 2006 – more about that below.

But it was during the 2008 presidential election, when she returned to SNL to create and own the impersonation of Vice-Presidential Nominee Sarah Palin that, for me, Fey transitioned from admired writer/actress to hero:

If you haven’t seen these, find them on YouTube.

In the meantime, Fey was busy – in 2006, creating and starring in the TV show 30 Rock which ran for seven seasons, writing screenplays, starring in and/or producing movies, appearing on TV shows, winning numerous awards, getting married, giving birth to two daughters, writing a book.

So, Tiny Fey:  Not only smart and funny, but also rich – here’s Fey’s bank account in 2019 according to the website Celebrity Net Worth:

So why did she make that awful commercial?  She sure doesn’t need the money.

I’d said earlier that the commercial was so awful that the advertiser, and the product being advertised, were not even on my radar.

It turns out that the face-licking ad is one of two Fey has done for Allstate Insurance.  The face licker is an actor named Dean Winters, personifying the idea of mayhem, i.e., “disorder, confusion, chaos.”

I found this article in AdAge: 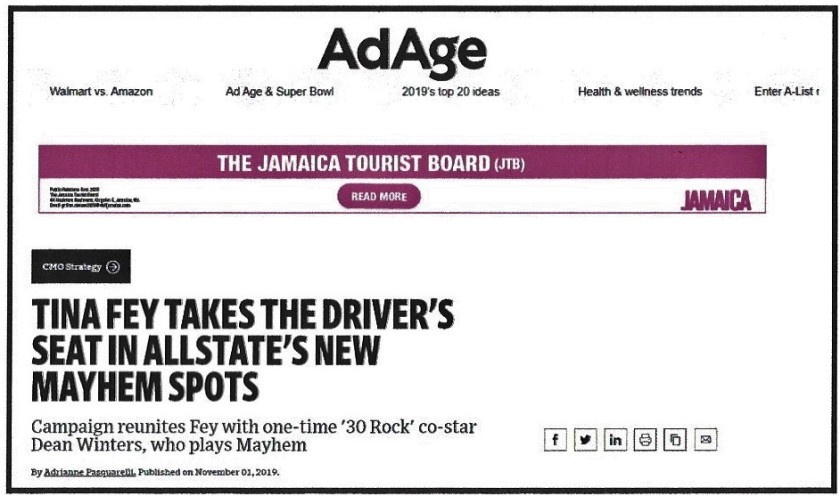 “In the new TV spots, Fey plays a driver using Drivewise, a nine-year-old product that tracks how carefully someone drives and offers perks accordingly:

“In one commercial, Winters plays a rambunctious Saint Bernard pup eager to distract the driver; in another, he plays a critical mother-in-law whose cutting remarks provide the same level of distraction as the dog.”

The AdAge article goes on, as do other articles about the Fey/Allstate ads, but none of them answered my burning question:

Why did Fey do this?

I even googled “why is tina fey doing allstate commercials” and got 124,000 results – but no answer.

And I suppose one of these days I’ll be half-watching TV and Fey’s other Allstate ad – the mother-in-law – will come on.

Does the mother-in-law lick Fey’s face, too?