It’s been a while since I featured Numbnuts in the News, but my newspaper had such a collection that I had to share them.

Let’s start with Ian Simmons and Joshua Reinhardt, both 34.  Last month they were pulled over on I-10 in Florida after a trooper clocked them going 95 mph:

The trooper determined that Reinhardt was the subject of an active felony warrant for violation of probation, so driving that fast and attracting attention to yourselves probably wasn’t their best idea.

No, this was their best idea: 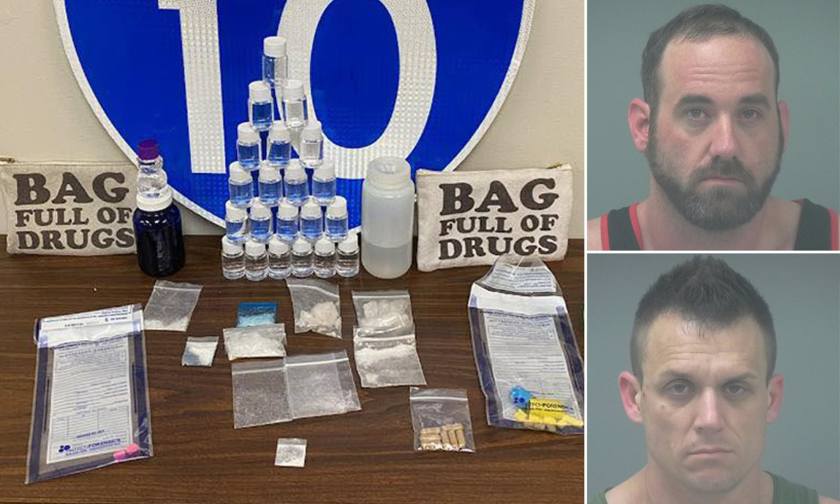 They had a stash in two bags marked “Bag Full of Drugs.”

What a good idea!  If Simmons (above, bottom image) and Reinhardt had forgotten where they’d put approximately 75 grams of methamphetamine, 1.36 kilograms of the date-rape drug GHB, 1 gram of cocaine, 3.6 grams of fentanyl, 15 MDMA tablets and drug paraphernalia…

All they had to do was look around and say, “Oh, thank goodness!  There’s our stash, in those bags marked ‘Bag Full of Drugs!’”

A bit of research and I learned that Simmons and Reinhardt bought the bags here: 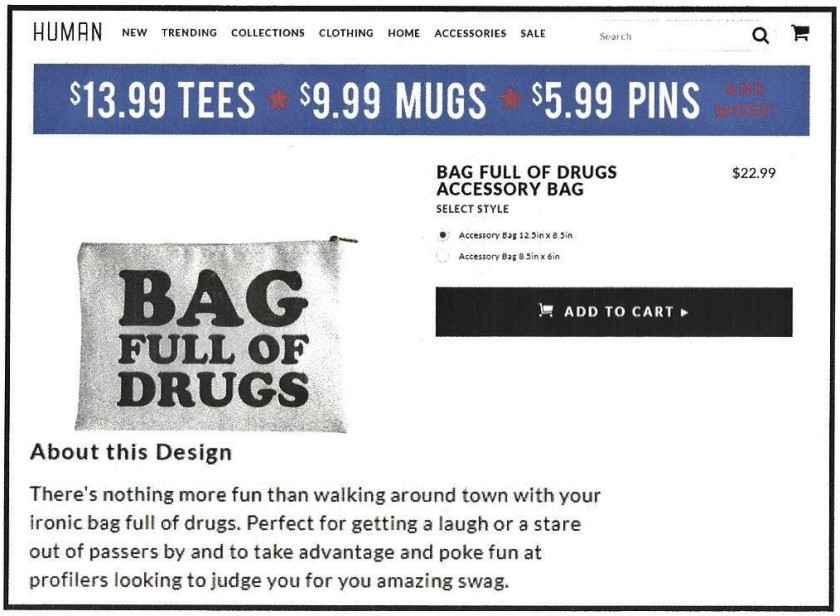 But as you can read in the small print, the point of the “Bag Full of Drugs” is to have fun fooling people into thinking you’re walking around with some “amazing swag.”

Not with controlled substances that can get you 30 in a Florida slammer.

Last fall a guy walked into a bank in Dunfernline, Scotland.  He was carrying a pillowcase with something bulky in it.

The bulky item was a meat cleaver, and he was there to rob the bank.

Before he announced his intention, however, he removed the cleaver and put the pillowcase over his head – a clever disguise.

Except for one thing:

He’d forgotten to cut eye holes in the pillowcase.

This was Matthew Davies, 47, and unfortunately, no image of him appears to be available, so I’ve improvised (left).  Just pretend the eyeholes aren’t there, OK?

When Davies realized he couldn’t see anything, he removed the pillowcase from his head, made a lot of noise and threatening gestures with the meat cleaver, and got away with almost £2,000.

He then strolled out of the bank and headed home, and a brave bank customer followed, then alerted the police.  Davis was arrested at home, where police found cash, a pillowcase and a stun gun in Davies’ house.

In late February Davies was sentenced to four-and-a-half years in prison.

Some stories reported that as Davis was heading home, he stopped to pet a dog.

And finally, this guy:

Also last month, Adrian Afriyie Ansah-Asante, 23, was driving around Waterford Twp., MI when he was pulled over by Oakland County Sheriff Mike Bouchard.

Asante was pulled over because Sheriff Bouchard noticed that Asante’s SUV was fitted out with “big police-style bumpers, an array of lights on the back and a decal that read ‘Emergency Response.’”

The car also featured a radar-type thing on the dashboard and a police-style computer.

The problem?   The police car was a fake, and Asante was a fake – not a cop or a member of any Emergency Response unit.

His shopping included a loaded gun and a large knife.

Now you get to decide which of these guys is…