Review, short version:  One rose out of four.

Suppose it’s 1915 and you’re in the United States.

It may be that you want to go to Europe.

It may be that you have to go to Europe.

Either way, a reminder:  It’s 1915 and there are no commercial airplanes to take you to Europe.  And commercial travel by blimp doesn’t come along until the 1920s.

So you book your passage on a cruise ship.

And the top-of-the-line, most luxurious cruise ship in 1915 was this:

In May 1915, plenty of people had booked their cross-Atlantic passage on the Lusitania, some with trepidation – Europe was embroiled in World War I, and the German Embassy in New York had put this notice in the shipping pages of New York newspapers on April 22, 1915:

“Liable to destruction.”  No wonder some people were worried.

But the British-owned Lusitania was seen as invulnerable; it was the fastest ocean liner then in service.  And, people were assured, the ship was thought to be so fast and so large that no German submarine could catch it, or sink it.

This brings us to Kim Izzo’s Seven Days in May – three of her lead characters had booked passage on the Lusitania, departing New York on May 1, 1915.  The book’s title comes from the number of days they would spend on the ship. 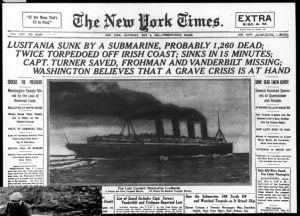 Those three lead characters are New York heiresses Brooke Sinclair and her younger sister Sydney, as well as titled Englishman Edward Thorpe-Tracey, Brooke’s fiancé.  Brooke and Edward are going to England to be married, with Sydney as Brooke’s maid of honor.

The fourth lead character is Isabel Nelson, who works at the British Admiralty in the top-secret Room 40.

Some of Seven Days in May is the backstories of these characters – we learn about Brooke’s narcissism, Sydney’s political causes, Edward’s financial problems, and Isabel’s supposedly sordid past.

Or so author Izzo says, and she makes her viewpoint clear.

The sinking of the Lusitania on May 7, 1915 – just 14 miles off the coast of southern Ireland – was shrouded in mystery then, and still is today.  For every fact proposed, there’s someone who staunchly argues otherwise.  The ship was carrying a large amount of ammunition – no, it wasn’t.  It was struck by one torpedo – no, it was two torpedoes.  The death count was 1,128 or 1,198 or 1,201 or something else, depending on who’s telling the story.

Why did this “invulnerable” ship sink in 18 minutes?  Why did the Admiralty try to blame the captain?  Why did so many people die, after the 1912 lesson of the Titanic and that ship’s tragic misuse of lifeboats?

Izzo makes her viewpoint clear about it all, though in her Author’s Note she does allow that “the Lusitania remains an enduring mystery.”

Izzo’s recounting of the Lusitania sinking doesn’t start until page 255 out of 346 pages, but when Sydney and Edward end up in the Atlantic, and Brooke’s whereabouts are unknown, it does make for fairly suspenseful reading.  And Isabel’s behind-the-scenes-in-Room-40 perspective on what the British government does and doesn’t do – before, during and after the sinking – had me shaking my head.

And wanting to learn more.

I started learning more by watching a 60-minute DVD by National Geographic, Last Voyage of the Lusitania, released in 1994.

It features Bob Ballard, he of found-the-Titanic fame, this time exploring the wreck of the Lusitania.  Toward the end of the film he offers his theory of why the ship sank so quickly.

Leading up to that there’s lots of video from Ballard’s then-state-of-the-art underwater robotic technology, interviews with survivors who were young passengers when the Lusitania sank in 1915, and tragic shots of recovered bodies in open coffins, waiting to be identified.  Some never were, and some bodies were never recovered at all.

The video lists the lives lost at 1,195 – yet another different number from those I cited above – and at one point Ballard says the Lusitania sank in “15 minutes,” again different from the 18 minutes I’ve read many times.

Of the many Lusitania facts, stories and conspiracy theories, Ballard does not resolve whether or not the ship was carrying live ammunition in its cargo hold to help England’s in its war against Germany.  But many people are certain it was, and they’re also certain of this:

That the British government tried to destroy or at least seriously damage the wreck to obliterate whatever might be found by divers and salvagers.

Here are some online examples:

“The Lusitania appears in a much more deteriorated state due to the presence of fishing nets lying on the wreckage, the blasting of the wreck with depth charges, and multiple salvage operations.”

“The wreck is pocked with holes that were probably made with depth charges…we saw a number of unexploded depth charges, presumably a remnant naval exercises.”

“The wreck was bombed by the Royal Navy.  Depth charges were dropped on the wreck during World War II.  A Dublin-based technical diver, Des Quigley, who dived on the wreck in the 1990s, reported that the wreck is ‘like Swiss cheese’ and the seabed around her ‘is littered with unexploded hedgehog mines.”

“Professor William Kingston of Trinity College, Dublin claimed, ‘There’s no doubt at all about it that the Royal Navy and the British government have taken very considerable steps over the years to try to prevent whatever can be found out about the Lusitania.’”

“After its sinking, the British Navy mined the shipwreck to destroy evidence about what was held in its cargo hold.”

There’s a lot more, but you get the idea.

Back to my research…