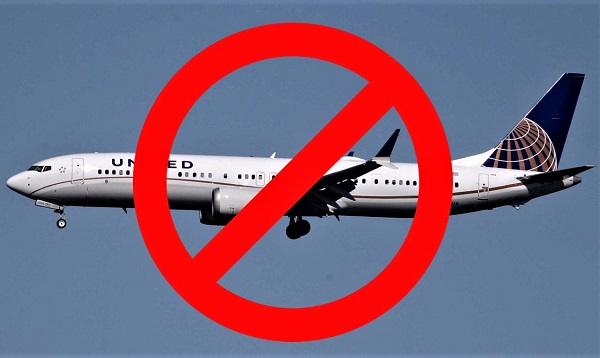 Once upon a time, long, long ago…

Flying on a commercial airline was fun.

This will take a lot of your imagining, but let’s give it a go.

A wide-body aircraft.  Let’s choose the DC-10, which was taken out of commercial service in 2007.

The DC-10 was so wide, it had a middle section with five seats:

A middle section where you could lift the arm rests and stretch out across those five seats for a nice nap.

And you could take a nice nap, because commercial planes often flew half – or more – empty.

There was plenty of food, and yes, it was airplane food, but it was pretty good.

And unlike today, it was free.

You didn’t pay $14 for a sandwich that looked like this:

And speaking of free, back when flying was fun, there were few – if any – of what the airlines today call ancillary fees, including:

And, there were few – if any – of what the airlines today call “incidents,” like we see today:

Though I think this recent event merits a stronger word than “incident”:

According to the article – and I’m quoting at length because it’s worth knowing the extent of how dangerous this “incident” was:

“The report said he walked into the cockpit area and grabbed a plastic knife, holding it in his shirt sleeve ‘like a shank.’  He also grabbed a champagne bottle and attempted to break the bottle on the counter.  He proceeded to kick and shove the service cart into the flight attendants.

“Rivas tried to open the aircraft exit door, pulling hard on the handle with one hand, at first, and then with both of his hands.  A flight attendant grabbed a coffee pot and smashed it on Rivas’ head, and several passengers came forward to assist the flight attendants.  One of the passengers, a police officer, pulled him away from the door, and another punched Rivas in the jaw as a third passenger grabbed his neck and pulled him to the floor, according to the report.  Passengers and flight attendants restrained Rivas with zip ties and duct tape.”

“By the end of 2021,5,981 cases of unruly passengers were reported, 4,290 of which were mask-related, according to data from the Federal Aviation Administration.”

Back in those long, long ago days, dangerous behavior on commercial aircraft was very rare.

Dangerous passengers are a big reason the fun has gone out of flying.

But here are two other situations that make me wonder how anyone can fly these days.

The pilot’s “blood alcohol content was found to be four times the limit for pilots.”

Apparently “a Transportation Security Administration officer noticed that he ‘may have been impaired,’ airport officials said in a statement.”

How many other pilots who “may” be impaired are not escorted off an aircraft and instead, fire up those engines and take off, risking hundreds of lives on the plane, and on the ground?

How many other pilots think a drink or two or eight won’t hurt – yes, according to an article on NBCNews.com, this Jet Blue pilot said he had “seven or eight drinks before he got on the aircraft…”

How about the pilot on your next flight?

Meet Marilyn Hartman (in assorted mug shots), also known as the “Serial Stowaway,” who has a long history of trying – and sometimes succeeding – to sneak on commercial airline flights:

On February 15, 2014:  At San Francisco International Airport, Hartman makes it through a Transportation Security Administration (TSA) checkpoint and onto a plane bound for Hawaii even though she doesn’t have a ticket.  When the person whose seat she’s occupying arrives, Hartman is caught.

How does someone “make it through” a TSA checkpoint with no ticket?  TSA staff are government employees, highly trained to be alert, watchful, aware of everything and everyone one around them.

January 14, 2018:  At O’Hare International Airport Hartman makes it past two Transportation Security Administration officers by hiding her face with her hair, then tries unsuccessfully to board a plane to Connecticut.  She then boards a shuttle bus to the international terminal and sleeps there overnight before sneaking onto a plane, sitting in an empty seat, and flying to London’s Heathrow Airport.  Caught, flown back to O’Hare International and arrested.

These are just three of 22 incidents involving Hartman recounted in this article:

In between her successes, Hartman was arrested numerous times at airports for violating a court order and trespassing, fraud by impersonation, misdemeanor reckless conduct, violation of bond, felony theft and other offences.

Recently, Hartman was once again in the news:

My point is – how did Hartman make it through the Transportation Security Administration’s check, the check-in at the desk in the boarding area, and that last check just before she headed down the jetway…

And how many other people are doing the same thing, but aren’t getting caught?

I seriously do not ever want to spend time on a commercial aircraft again.

Hell, I don’t even want to be in an airport, especially when this happens:

Flying is dangerous enough – we get stuffed into a long metal tube that can weigh 100 tons and we’re flying 30,000 feet above terra firma and we have no control over any of it…

I’ll wait to travel until I can do it like Captain Kirk and the Star Trek crew.

Until I can simply say…