If you told your boss, “Yeah, I’ll be in sometime tomorrow between, oh, 8am and noon,” I think we know it wouldn’t go over well.

So why is it when you and I, the consumers – when we’re the boss – are told, “Yeah, we’ll be there tomorrow to fix your sink between 8am and noon,” we say, “OK, great, thanks”?

Yet that’s exactly what we do when given a “service window” by a plumber, air conditioning company, termite inspector and numerous other service providers.

Well, phooey on that.

The last time I said, “OK, great, thanks,” it was to a widely advertised (“As Seen On TV!”) company that claims to love “wowing” their customers.  This is good.  I like to be wowed.  I want to be wowed.

I’d agreed to a service window of 10am to 2pm.  When 2:15 arrived but the service person hadn’t, I called the company.  “Oh, we have you down for this afternoon,” they said. 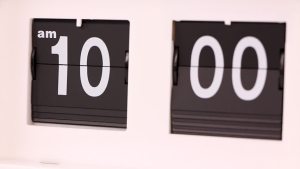 Their mistake, obviously, but if I’d been told “afternoon” I could have been out that morning running errands, rather than sitting at home, waiting for someone to show up.  At their convenience.  To provide a service that by the way, took 30 minutes, for which they charged enough money to feed a family of four.

It wasn’t the first time this happened to me, and I know it’s happened to you.  The reason for service windows, I suppose, is to allow for the unexpected.  A technician arrives to fix the dishwasher, and the customer ends up with three inches of water on the kitchen floor.  That delays getting to the next location, which delays getting to the next location, and so on for the rest of the day.

Companies would rather give themselves a big block of time and then brag about their “on-time service record” when they manage to show up one minute before the end of the service window.

Kind of like the airlines.  If they get you to your destination within a week of your original arrival time, it’s “on time” as far as they’re concerned.

Allow me to reiterate.  Phooey!

The one exception I make is for medical appointments.  I always take plenty of reading material, because I expect to be kept waiting – in both the reception room and the examining room.  I don’t like it, but I know many people schedule an appointment for one issue when in reality they have five:  “Doctor, while you’re here, could you look at this bump/lump/spot on the back/front/side of my knee/arm/ear?”

Not that you or I ever do this.

And what’s the doctor to do?  Say, “Sorry, your appointment was for your rash, you’ll have to make another appointment for that.”  Of course not.  So the doctor stays because, after all, the doctor’s goal is to help us.

Which ought to be the goal of all service providers, and maybe it is – secondarily.  Their first goal is to make money, which is a fine goal, but to do this they over-schedule too few technicians for too many service calls, and one glitch ends up wasting way too much of our time.

So here’s the plan.  The next time you need something done by a professional and the company wants a four- or five- (and yes, I’ve even heard of an eight-) hour service

window, politely but firmly say, “No.  I want an exact time.  If you can’t do that, then I’ll find a company that will.”

I know they’ll be quick to commit to an exact time.  How?

Because I did this last week, and I’m expecting the termite guy in five minutes.  And – oh, I need to answer the phone.

“Hello?  What?  Not for another three hours…”