I am done reading any book categorized as:

One book in this category is Gone Girl.  Read it, hated it.

Another is The Woman in the Window.  Read it, hated it and wrote about it here, back in 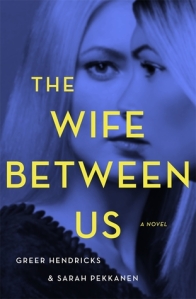 All three books are Women’s Fiction>Mystery, Thriller & Suspense and have gotten raves from readers.  Gone Girl was made into a movie; a Woman in the Window movie is in the works; and I have no doubt The Wife Between Us is on the same path.

Three movies I did or will skip.

When a book is labeled a “thriller” it is, by definition, supposed to

To do this, authors contrive plots and sub-plots with twists and turns that keep you guessing, and racing to the last page to discover who actually did what to whom.  In The Wife Between Us, for instance:

Early on we meet Vanessa, told in first person, and Nellie, told in third person.  Vanessa was married to Richard, and now Nellie is engaged to Richard.

Richard is an abusive psycho.

Somewhere along the line we discover that Nellie and Vanessa are the same person.

Richard has an assistant named Emma, who is the daughter of the married professor Vanessa/Nellie had an affair with back in college.  Emma wants revenge on Vanessa/Nellie for breaking up her parents’ marriage.

At some point we meet Kate, Richard’s ex-girlfriend, whom he also abused.

Vanessa/Nellie is the wife between abused ex-girlfriend Kate and soon-to-be-abused Emma.

I promise, if you look up the word contrived in the dictionary, you’ll see a picture of this book.

The Wife Between Us was supposed to keep me wondering, but all I’m wondering about is first, why I hung on until page 100, and second, why I tried another thriller after I suffered through Gone Girl and The Woman in the Window.

But amidst all this bad news there is some good news as well:

The book has two authors, Sarah Pekkanen and Greer Hendricks.

So I’m having twice as much fun mocking their efforts.