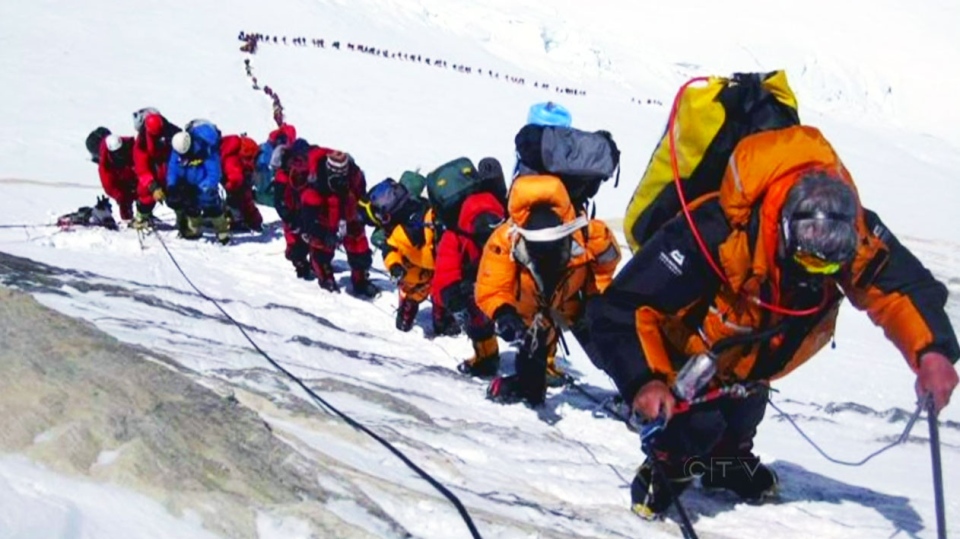 I was hunting for the right word or words to describe a recent story I’d read that had an outcome the opposite of what I’d expected.

Eventually my hunting led me to the right words:

Situational irony:  a discrepancy between what is expected to happen and what actually happens.

The situational irony I’m referring to is about Charlotte Fox, whom I’d never heard of and it’s likely you haven’t either.

This is also a story of mountain climbing and the people who do that.  Why they climb a mountain is something that’s never been adequately explained to me, other than, “Because it’s there.”

The mountain in this story is Mount Everest in Nepal, which we have heard of, mostly when people die trying to climb it.  And close to 300 have – from myriad causes including falling, oxygen deprivation, freezing, and avalanches.  Then there are those who just…disappear, like George Mallory,

and are presumed dead, cause unknown.

In 1996, Charlotte Fox was part of an Everest climbing group that ran into serious trouble one day, and she lived to tell about it.  Unfortunately, eight other people on the mountain that day did not.

The story of that tragedy was turned into a book, Into Thin Air in 1997, and a movie of the same name, same year.

Everest was neither the first nor last mountain Charlotte climbed; on an Everest history

website she’s cited as the first American women to summit three 8000m (five mile) peaks.  Her bio goes on to list where she climbed other mountains:  Asia, South America, Antarctica, Africa, Canada and the U.S.  So that Everest climb in 1996 was not Charlotte’s first rodeo, as they say.

Eventually Charlotte settled in Colorado, and apparently she still loved climbing; she moved into a 4.5-story house with 77 stairs.

It was in that house in May 2018 that Charlotte, who’d survived Everest and conquered so many other mountains, died.

She fell down the stairs.