The people in the above picture are:

They’re doing what not some, not many, but most people are doing at work:

There are all sorts of articles online suggesting that people spend too much time on social media, from Put Down Your Smartphone And Get A Life! to Social Media Is Toxic.

I usually don’t pay attention to them because I don’t have a smartphone. 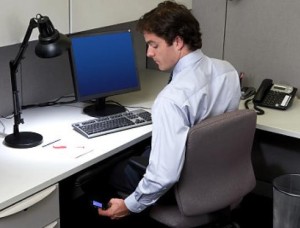 Nor was it addressing those who catch up on texting while they’re driving 80 mph on the freeway.

No, this article was for people who are at work, getting paid by their employer to work, but instead are “liking” pictures of what their friend had for breakfast.

The article calls this “distractions that make it harder to be productive,” and offers some self-help suggestions, classified as “Moderate,” “Aggressive,” and “Extreme”:

When did scrolling social media at work become so “normal” that it’s being addressed in self-help articles?

According to these statistics, lots of time at work wasted on social media for personal reasons is the new “normal”: 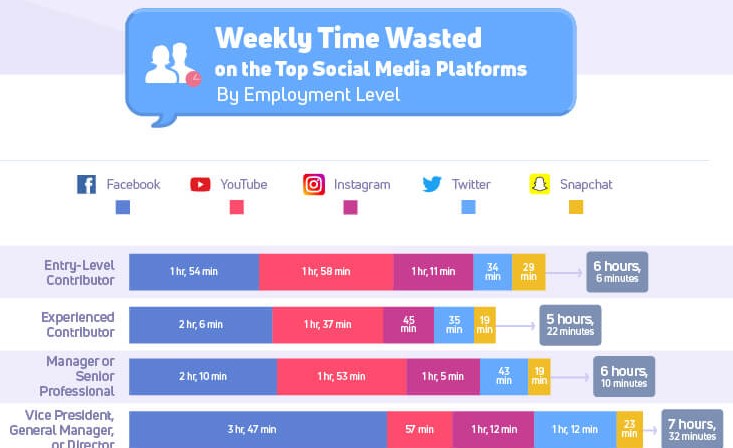 Wow!  That’s a lot of time spent looking at pictures of what your friend had for breakfast!

But…Does this mean that the teacher is watching a YouTube video instead of helping your child learn to read?  That the firefighter is liking a Facebook post while your house

is burning?  That the surgeon is checking Twitter while he operates on your brain?

Now, I’m not advocating that employers confiscate employee cell phones when they arrive at work, with no access until the end of the work day.

We need our phones available if, for example, a parent is called to pick up a sick child at school; a patient is expecting results from a medical test; somebody pushes the big button and nuclear war has begun… 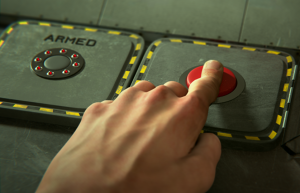 Well, if somebody pushes that big button, it won’t much matter what you’re doing at work.

In Kick That Social Media Habit, the author suggests that if all else fails, one can become “a born-again Luddite, joining the 23 percent of Americans who don’t own a smartphone.”

Rest assured, I am no Luddite.

Earlier I said I don’t have a smartphone, but I am into 21st century technology.