Now you, too, can be featured on the highly esteemed CBS This Morning and CBS Evening News – on the same day!

If you can answer “Yes!” to all three questions – get ready for your close-up!

Actually, it’s been multiple close-ups; this story was covered not just by CBS, but by NPR, CNN, NBC, ABC, Fox, AP, U.S. News, Inside Edition, The New York Times, People, Washington Post, USA Today, and The Guardian, to name more than a few.

And yes, The Guardian is a British daily newspaper, so, girl – you’ve gone international!

The story I’m referring to involves “Leanne,” who asked that her last name not be revealed for reasons that will soon become obvious.

And the coverage I’m quoting is mostly from the March 11 CBS This Morning and CBS Evening News for the reason that I was too lazy to change the TV station.

It appears that last Saturday, Leanne No-Last-Name was at the Wildlife World Zoo, Aquarium and Safari Park near Phoenix.  Note the word “Wildlife” – it’s relevant.

Leanne was strolling past a big cat enclosure containing a black jaguar like this one:

Well, rather than just pulling out her phone and taking a few pictures, apparently Leanne thought the jaguar would look even more impressive if she was also in the picture.

In other words, if Leanne got up close and personal with a wild animal, and took a selfie.

So, according to CBS This Morning, she crossed this concrete barrier:

The barrier that was put there to protect humans from the wild animals.  You see, Leanne, it’s called the “Wildlife Zoo” because wild animals live there.

The jaguar reached through the fence and grabbed Leanne’s arm, and here’s where the media got creative.  Depending on who’s telling the story, she was:

This led to a rescue by some bystanders, while another bystander shot video of Leanne on the ground:

And recorded her groaning, “It hurts.  It hurts.”

Leanne later told CBS News she’s grateful to her rescuers but “unhappy” their video was made public.

And I’d agree, Leanne, this probably wasn’t the best angle for your close-up:

But she was not so “unhappy” that she declined doing another video, this one with the CBS Evening News:

In the interview Leanne said, “I was in the wrong for leaning over the barrier.”

But the zoo, “citing witness accounts, has said the woman crossed over a barrier.”

This is a three-foot barrier which does meet federal guidelines, so unless Leanne has excessively long arms – I’d say yup, she crossed it.

“But I do think,” Leanne whined, “that maybe the zoo should look into moving their fence back.”

Gosh, Leanne.  I do think that maybe you should have looked into moving your selfie-taking self back outside the barrier.

And gosh, Leanne.  Wildlife World hosts about 500,000 visitors annually, but it was you who thought crossing that barrier for a selfie with a wild animal was a good idea.

Perhaps Gayle King put it best on CBS This Morning when she said, “At least she knows it was a bonehead move…” 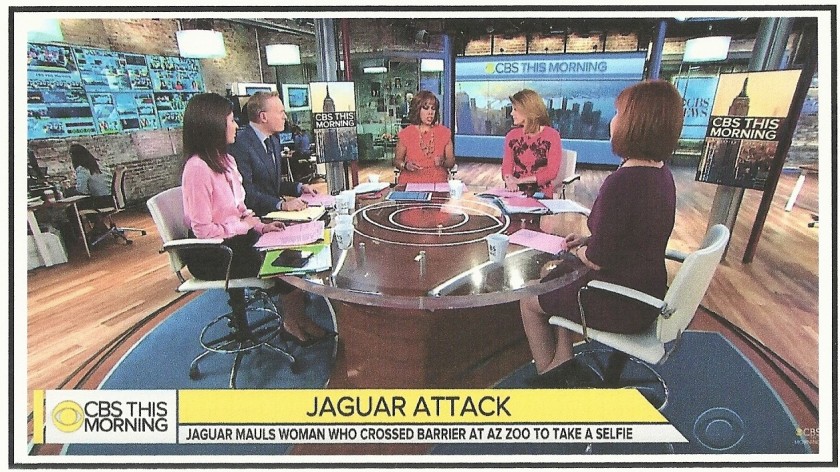