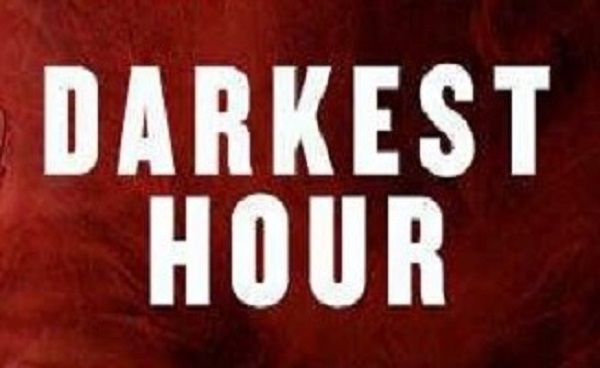 It’s dinnertime and you’re sitting at the table.

You may be by yourself, or with some combination of Significant Other, children, family members and/or friends.

You’ve lit candles on the table; otherwise your home is in complete darkness…

And it’s hot as hell in the house…

We’re in San Diego and it’s between 4pm and 9pm.

Because 4-9pm will be “on-peak” electricity time, which means using electricity during this time costs the on-peak – highest – rate.

You’ll wait until after 9pm and then turn on the A/C and lights, make dinner, and eat sometime around 10pm.  Your dinner guests, if any, have given up and will stop at McDonald’s on their way home. The kids, if any, will do their homework till midnight.

This evening of heat, hunger, darkness and disappointment was brought to you by…

In an attempt to be fair – which, when it comes to SDG&E, I rarely attempt – I can’t blame this entirely on SDG&E.

SDG&E is one of the three investor-owned utilities (IOU) in California – the other two are Pacific Gas & Electric (PG&E), and Southern California Edison (SCE).  These three have about 20 million customers.

All three IOU have been directed by California Legislature and California Public Utilities Commission (CPUC) to move customers from a tiered billing system to a time-of-use (TOU) format.

Hence, time of use = peak time = 4-9pm = most expensive electricity.

And it isn’t just California; utilities – investor-owned and otherwise – all over the country are considering, or already transitioning to, TOU formats.

What is time-of-use, TOU?

The simplest definition I can find is, “When you most need to use electricity, you’re screwed.”  Sure, it’s cheaper to do my laundry at 10am, but I’m at work at 10am.  It’s cheaper to leave off the lights, but I tend to fall over furniture when I do that.

So, no – a TOU format wasn’t another one of SDG&E’s bad ideas, like the San Onofre Nuclear Generating Station (SONGS) which they had to shut down in 2013.  SONGS is now home to 3.5 million gallons of nuclear waste, just waiting for an earthquake to shake, rattle and roll out that waste all over San Diego and Los Angeles and into the Pacific Ocean.

Not that we have earthquakes in California.

And time-of-use pricing actually has some proponents; the Environmental Defense Fund (EDF), for one, said TOU pricing,

“…If done right, is a low-cost strategy to help meet California’s climate and clean energy goals.  This innovative tool can help the state rely more on clean energy and less on fossil fuels, at the same time delaying the need for new infrastructure and reducing costs and harmful emissions.”

But therein lies the rub:  that “if done right” phrase.

Because I’d define “done right” as “a simple, straightforward, and clear.”  And SDG&E’s plan – the roll-out begins in March and continues into 2020 – is anything but.

What is clear that if you come home from work and do the normal things – fix dinner, throw in a load of laundry, put on some lights, watch TV – you’ll pay the highest charge for electricity.

Or, you can sit in a hot, dark house and wait for the time to pass.

Hence, The Scenario, above.

Based on many hours on SDG&E’s website, the following is my take on the new time-of-use plan, with this heads-up:  To make sense this you’ll either have to:

First, SDG&E doesn’t have a time-of-use plan – it has five of them:

I requested my options and got the five plans and the cost differences:

Let’s take a closer look at my per-year savings:

Now I wanted to look at the particulars of each plan and – oh, joy! – SDG&E narrowed it down to four:

From now on I’ll mostly be talking about these plans that apply to me.

I see that my TOU-DR1 and TOU-DR have three time period plans; my TOU-DR2 has two time periods: 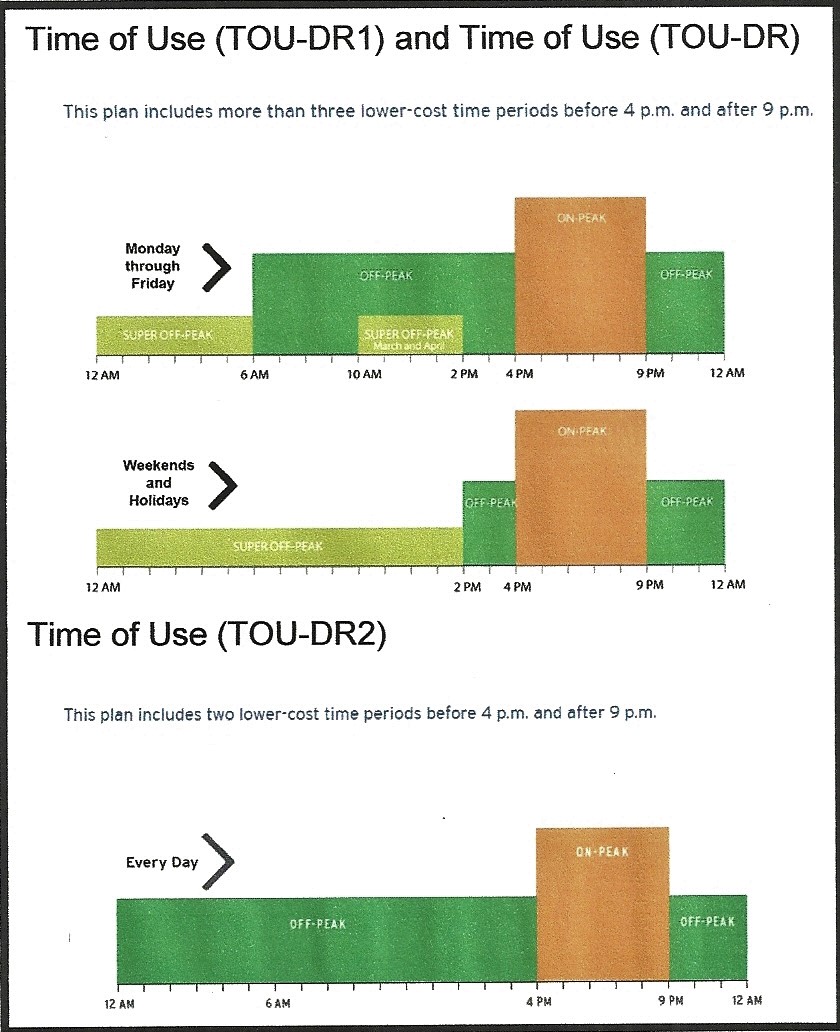 I also stumbled across a graph for TOU Plus: 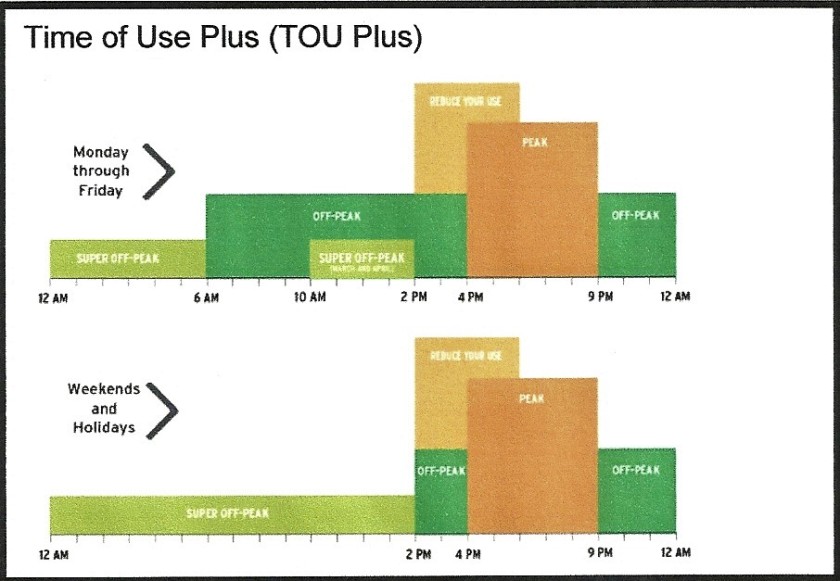 Now, “TOU Plus” doesn’t match any of the acronyms in the numbered items above, so more confusion.  But unlike Standard (DR), TOU-DR1, TOU-DR2 and TOU-DR, TOU Plus does include Reduce Your Use, which you can read about here:

The Standard (DR) plan has something called “higher usage charge”:

TOU-DR1, TOU-DR2 and TOU-DR are not subject to the higher usage charge.

Then there’s something called your “baseline allowance,” which does apply to DR, TOU-DR1, TOU-DR2 and TOU-DR: 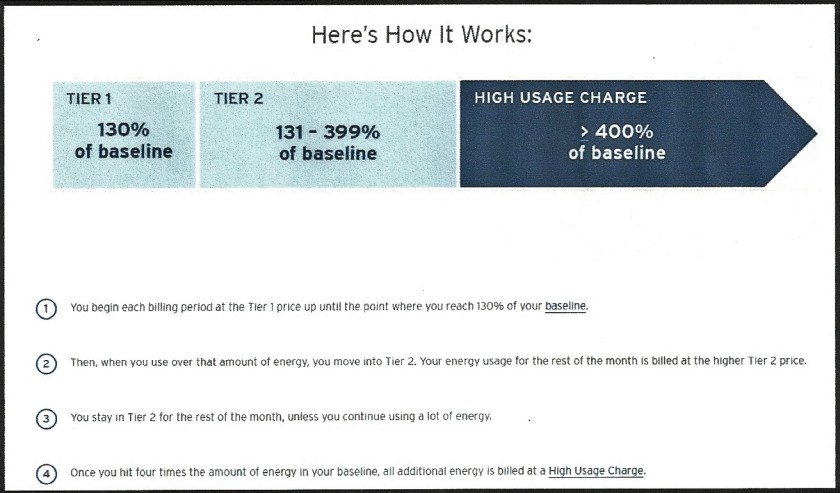 Here’s the formula, which depends on where you live and either summer or winter:

And here’s a handy graph showing “How Time of Use and Baseline Work Together”:

And if you can figure all that out, you either asked Einstein or are Einstein.

Going back to those time periods in TOU-DR1, TOU-DR2 and TOU-DR, they have names:

SDG&E’s website adds, “Energy costs are lower during the off-peak and super off-peak (TOU-DR1 only) time periods and highest only during the on-peak period.” 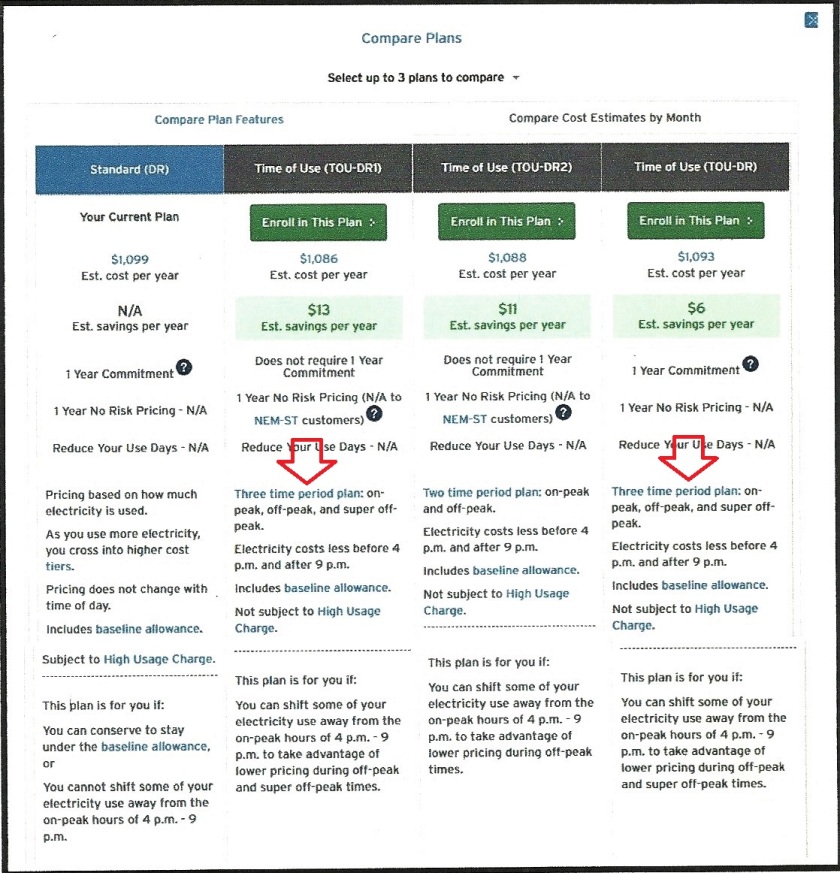 But help is on the way!  Because SDG&E cares about us (not), they’ve started airing a commercial starring “Whendell,” a talking watch:

Whendell whispers, “Soon I’ll be sharing SDG&E’s new energy pricing plans with you.  They’re all about when you use energy.  And who better to talk about when than me?”

Well, let’s try applying what we’ve learned so far to a real-life situation.

This handy graph, provided by our newspaper, shows a TOU plan with three time periods:  on-peak, off-peak and super off-peak.  Is it TOU-DR1 or TOU-DR?

Now let’s say I’m going to make some toast.  Using this graph and the other information I’ve fumbled through, we can figure out the cost per kilowatt hour (kh) for using the toaster.

Note:  SDG&E has established that summer is June 1-October 31; winter is November 1-May 31.

Reminder:  We’re talking about TOU-DR1; TOU-DR2 does not have super off-peak rates.

And – oh, joy, again! – according to the newspaper’s graphic, TOU-DR1 has an extra super off-peak rate time:  Monday-Friday in March and April, during which 10am-2pm is also super off-peak.

If I’m on plan TOU-DR1 and I make my toast on a weekend in winter at 3am which is super off-peak time, it’s 22ȼ per kh.

If I fire up my toaster on a Tuesday in summer at noon which is off-peak time, it’s 21ȼ per kh.

And if I give in to my craving for toast in summer on a holiday at 5pm which is on-peak time, it’s 44ȼ per kh.

Remember when we talked about “baseline allowance”?  All this changes if I exceed my baseline allowance.  When I do that, then with our TOU-DR1 option, making my toast during the summer and during the on-peak rate time, the cost goes from 44ȼ to 65ȼ per kilowatt hour.

Now let’s do a quick recap of what I’ve learned but don’t comprehend so far:

One last note.  The four plans I reviewed – DR, TOU-DR1, TOU-DR2 AND TOU-DR – all have something called “1 Year No Risk Pricing.”  That means over the course of the first year, customers can switch to a different plan at no cost.

Probably because it will take us a year to figure out what this all means.

And just when we’ve finally gotten it right – surprise!

In late February the San Diego City Council voted to move one step closer to that “alternative to SDG&E,” something called “Community Choice Aggregation” (CCA).  This system allows “any city, county or combination to form an entity to take over the responsibility for purchasing power for their community.”

If San Diego goes ahead with CCA (likely) and pulls other local cities into the program (also likely), and CCA goes into effect 2021 (iffy), everything above about DRs and TOUs and Super Off-Peak and all the rest is out the window because SDG&E customers will have a choice between staying with SDG&E, or signing up for CCA.

If one chooses CCA there will be all sorts of new things to compare and figure out and commit to, and all I can say is…

The day after I looked at my plan options on SDG&E’s website, I looked again – and the savings had changed:  The savings on two of the three plans were less the second time I looked: 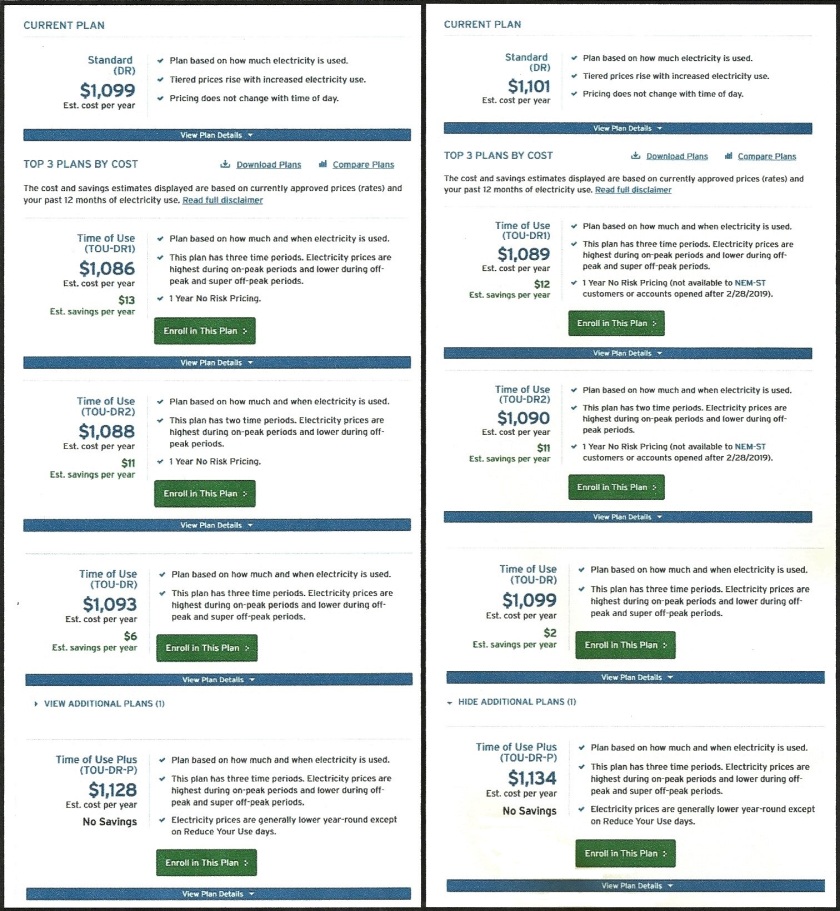 How did that happen?  How did I lose money before I even chose a plan?  If I look tomorrow, will it change again?