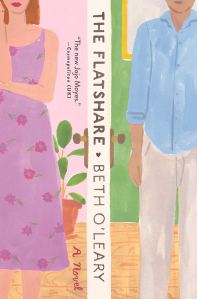 Review, short version:  Four roses for him, four skunks for her.

The Flatshare by Beth O’Leary presented me with a conundrum:

To finish, or not to finish?

To finish:  I really liked the lead male character, Leon.  He’s a palliative care nurse working at a hospice.  He’s kind and sensitive and considerate.  And he’s on quests to help two people simply because he cares about them so much.

Not to finish:  I really disliked the female lead.  First, her name was “Tiffy.”  And second…

Well, I really didn’t need a second reason.  An adult woman choosing to go by the name of “Tiffy” was reason enough.

But there were plenty of other reasons to dislike Tiffy.

The story starts with Tiffy in desperate need of a place to live.  She and boyfriend Justin had been living together, but he dumped her.

But not yesterday or last week – he dumped her three months earlier.  But she’s still living at his place, even though Justin is now engaged to someone else.

And she owes him three months back rent.  The word “parasite” comes to mind.

Tiffy is self-centered, and clueless about social boundaries.  She dresses in Bag Lady Chic (yes, there really is such a thing), I guess to demonstrate her free spirit.

“That’s what I’m thinking, and that’s what comes out of my mouth.”  (I don’t consider a lack of self-censorship admirable.)

“I am very good at not thinking about things, though, so I’ve just…resolutely not thought about it.”

“This rush of doing something ridiculously spontaneous – the total aliveness of whirling yourself off-plan and shutting up all the bit of your brain that tell you why this isn’t a sensible idea…God, I’ve missed this.”

The last was promptly followed by Tiffy running into the ocean, spraining her ankle and nearly drowning.

They start to leave each other notes, which, as time passes, become more personal.

The book’s point of view switches between Tiffy and Leon, both first-person narrators, and when the focus was Leon, I got very caught up in his story – the depth of his caring for his hospice patients, his worry about and love for his brother Richie, his backstory. 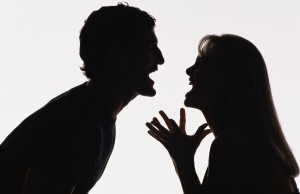 abused by Justin, and after she moves out, his abuse – now combined with stalking – continues.  And while those circumstances brought on my sympathy, it was too late for me to like her.

After the final chapter, there’s a two-year-later Epilogue with Leon at his best and Tiffy still…Tiffy.

But – as if they’d simply vanished – there’s no mention of Richie, or Justin, or two other important characters, Mr. Prior and Johnny White.  Important story lines but no resolution.

Perhaps O’Leary will write a sequel where they all end up living together, and call it…