The Department of Justice (DOJ) issues a news release like this one:

Names are named, fines are fined, and sometimes heads – metaphorically – will roll.

The canned tuna that, combined with mayo and celery, is the foundation for my beloved tuna fish sandwiches?

And it turns out, this canned tuna price fixing is very high profile, too.

But, briefly – what is price fixing?  The Federal Trade Commission explains it far better than I could:

Unless they get caught.

And the above-pictured canned tuna companies – Bumble Bee, StarKist and Chicken of the Sea – all got caught.

This hit close to home – my home – both because I’m a canned tuna consumer, and the tuna industry is an integral part of San Diego’s history.  Back in the 1920s, San Diego was known as the “tuna capital of the Pacific.”

In the 1970s, tuna was San Diego’s third-largest industry, employing some 40,000 San Diegans in catching, canning and marketing the product.  Two of the three big tuna 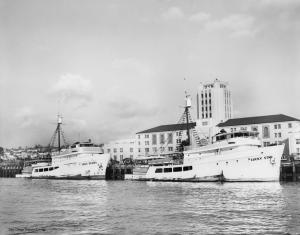 canning companies were based here, and the waterfront was home to four canneries and scores of fishing boats.

The industry has mostly vanished, but Bumble Bee is still headquartered in San Diego.  It’s the nation’s largest branded canned seafood company, and a major player in the industry – a 41% U.S. market share for canned albacore and 13% percent of the canned “light meat” tuna market.

This was part of the fallout from price-fixing charges first brought in 2016:

All three companies were charged with price fixing – “collusion in the seafood packing industry” in government-ese – from at least 2011 to 2013.

Which was followed by this: 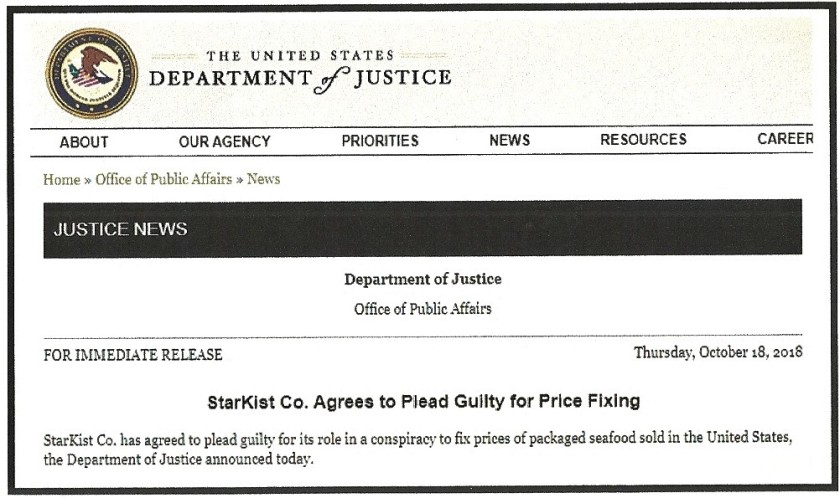 The price-fixing scheme came to light when Chicken of the Sea’s attempt to buy Bumble Bee failed in 2015, according to court records.

Chicken of the Sea executives then alerted federal investigators, and the company received conditional leniency from the Justice Department for its cooperation with the price fixing investigation and didn’t have to pay fines. 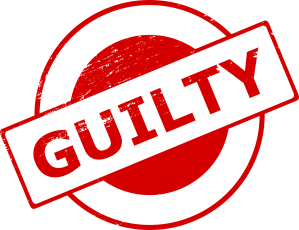 In September 2018 a federal judge ordered StarKist to pay a $100 million fine for its role in the collusion.

Bumble Bee agreed to pay a $25 million fine after pleading guilty to price fixing in 2017.

But Bumble Bee former CEO Chris Lischewski apparently decided to take his chances in court – he pleaded not guilty.  (Lischewski had “stepped down from his leadership position” in May 2018.)

According to a 12/1/19 article in the Los Angeles Times, Lischewski was

“a major prosecution target because he was one of the most respected and influential executives in the tuna canning industry.

“And also because, by the government’s reckoning, he was a mastermind of the scheme.”

In early December, Lischewski was convicted in the price-fixing conspiracy by a federal jury in San Francisco:

Lischewski faces up to 10 years in prison and a fine of $1 million, according to the indictment.  His sentencing is set for April 2020.

Experts say this is likely the final piece of the DOJ probe.

I remember thinking over the years, “These cans of tuna are getting smaller.”

“Bumble Bee, StarKist and Chicken of the Sea took several steps to shore up profits.  They shrank the size of their cans without a commensurate price reduction.  The seven-ounce cans that were the standard as recently as the 1980s gave way to six-ounce cans, and a couple of years ago to five-ounce cans.”

But apparently less tuna for the same (or more) cost to consumers wasn’t enough “shoring up” for these guys.

So they added price fixing to their recipe.

This price-fixing conspiracy involved three companies, but required only one ingredient:

Looks like former-CEO-now-felon Lischewski will have plenty of company: 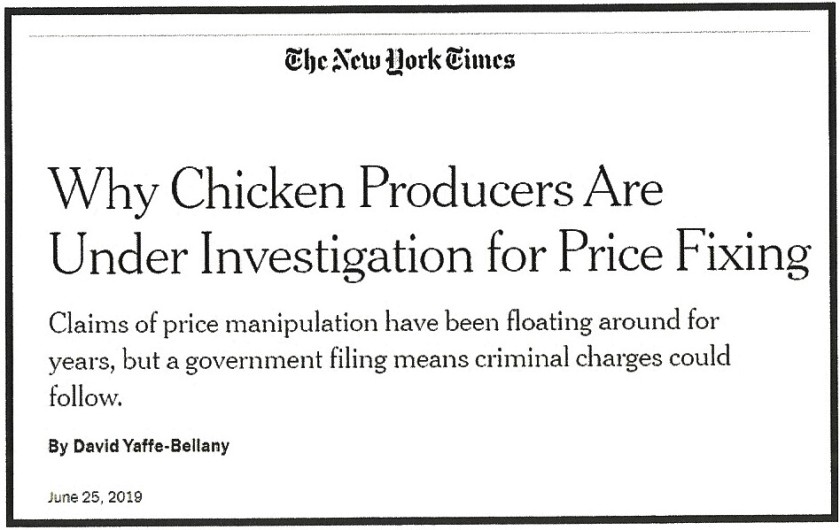 According to the article,

“Bumble Bee Foods has been sold for $928 million to Taiwan-based FCF Co., after years of legal troubles and bankruptcy for the San Diego-based company.

“Fines and litigation cost Bumble Bee millions of dollars, according to bankruptcy documents, eventually leading it to explore a sale.”