Here’s a recent headline from Politico:

It appears that a section of Trump’s wall, constructed by Fisher Industries of North Dakota, is showing dangerous “signs of erosion” only months after being completed:

Not only showing signs of erosion, but “segments of Fisher’s steel structure could topple into the river if not fixed. “

The section cost $42 million, and I think we know who paid for this debacle.

And why is Fisher Industries’ wall section getting such widespread attention?

Trump, without hesitation, had the answer:

“It was only done to make me look bad” 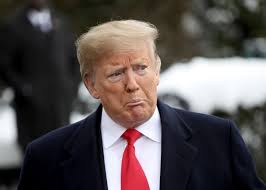 In fact, everything that goes wrong in this country was and is perpetrated by people whose actions are solely directed at the goal of making Poor Donny look bad.

I can think of a dozen situations – in fact, I have thought of them – where the actions of others were done with only one goal in mind:

Let’s borrow that Politico headline, make a few adjustments, and I’ll show you what I mean:

Even though Roger Stone clearly was guilty of obstruction, making false statements, and witness tampering, the jury convicted him only to make Poor Donny look bad.

For sure.  Fay was just hanging out around Bermuda, as tropical storms do, but then she thought, “I’ll cruise up the East Coast, to where Trump’s having that rally in New Hampshire on July 11.  He’ll have to cancel, and that will make him look bad!”

That darn Supreme Court!  Maybe we could get Roger Stone to tell them to just forget the Constitution, because when they rule against Trump, it makes him look bad.

Obviously.  The Minneapolis police chose to go after George Floyd on May 25 knowing it would start a worldwide wave of protests, all for the purpose of making Trump look bad.

You weren’t thinking that closing businesses and telling people to stay home was a way to try to prevent the spread of the coronavirus, were you?

Do those 40 million+ plus people who’ve lost their jobs due to the pandemic really need that unemployment money?  Nah.  They’re only asking for it to make Poor Donny look bad.

Clearly, the people dying from COVID-19 must have some sort of grudge against Donny, and are doing this to make him look bad.

Think about it.  Why else would the VA fail to provide even minimally adequate health care for our veterans, except to make Poor Donny look bad?

Yes, all those asylum seekers from El Salvador and elsewhere came here not to save their lives and give their children hope for a better future, but only to make Poor Donny look bad.

Somehow, somebody back in 2001 knew Trump would be in the White House one day, and decided to invade Afghanistan so that someday, mean people could use the war to make Poor Donny look bad.

Yup.  The Access Hollywood producers just knew that on that day in that interview, Donny would talk about grabbing women by the pussy, so they kept that video rolling solely with the intent of making him look bad.

And finally, as the pandemic rages across our country, Trump is spending more time on the golf course than he does in briefings with Dr. Anthony Fauci (Fauci says he hasn’t briefed Trump in two months).

When those who unkindly suggested that perhaps the time he spends playing golf is excessive, naturally Poor Donny defended himself by saying that “Obama played much more and longer rounds” of golf – as he tweeted on July 12:

Which led to this unkind headline:

Which clearly leads to here: