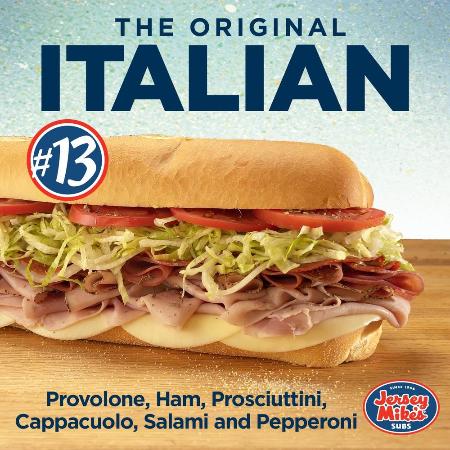 I discovered Jersey Mike’s Subs several years ago and I’ve been hooked ever since.

Where I live, they’re easy to find:  California has 295 locations, more than any other state:

It appears that the only state that doesn’t have Jersey Mike’s is Alaska, and that alone is reason enough not to go there.

So I’m hooked, particularly on the sub pictured above:  #13 Italian, Mike’s Way.

And I’m saying I can eat that and feel good about it?

Yes, for two reasons.  Here’s one:

On a recent weekend I happened to learn that on that Saturday and Sunday, all 50 Jersey Mike’s locations in San Diego County would be donating 20% of sales to Feeding San Diego.

So that weekend, when I got my #13 Italian, Mike’s Way, I felt good about having my fav sandwich and donating to Feeding San Diego.

According to Jersey Mike’s website, the company is big on donating.  On their Culture of Giving page…

They list their “Day of Giving – Over $30 Million Raised Since 2011”; “Wreaths Across America,” where “stores throughout the nation collect donations for this non-profit organization, which lays thousands of wreaths at the graves of the nation’s veterans in the Christmas season”; and a list of news releases going back to this one in 2007:

The more I read, the more impressed I was.

And the more I read, the more I wondered, “Is Jersey Mike’s really this committed to a ‘Culture of Giving’?  Do they really walk their talk?”

If so, is anybody else talking about it?

A google search first brought me this, from the august publication Forbes:

The article says, in part:

“That campaign generated over $2 million for Feeding America to help needy families and people who were going hungry.  Moreover, Jersey Mike’s 1,742 eateries (most are franchised and only 72 are company-owned) donated millions of submarine sandwiches to healthcare workers, seniors, children and other needy folks.

“That’s on top of Jersey Mike’s annual Month of Giving campaign, which includes a day when it donates 100% of sales – not just profits – to local charities nationwide.  Since 2011, it has distributed more than $32 million in these efforts.”

That’s just a sample – there was plenty more in the article.  And more here:

Earlier I mentioned Wreaths Across America – I went to their website and Jersey Mike’s is, indeed, listed as a corporate sponsor, a Level 6 Donor ($100,000 and up).

The Multiple Sclerosis Foundation website says Jersey Mike’s has “helped raise tens of thousands of dollars for the Foundation.”

This past March, the CEO of Make-A-Wish New Jersey said, “The support of our friends at Jersey Mike’s gives us the confidence that when we ask that magical question, ‘If you could have one wish, what would it be?’ no matter what a child’s answer may be, we can say that their wish will be granted.”

And in November, the CEO of Feeding America said their organization “is excited to partner with Jersey Mike’s to help food banks across the country provide more meals to people in need.”

I’m thinking that Jersey Mike’s Culture of Giving is, indeed, on the level.

And feel good about it.

Early on I said I have two reasons for feeling good about eating a Jersey Mike’s sub.

I request my #13 Italian Mike’s Way, but not cut in half.  At home I cut it in thirds, and then have it three days in a row: