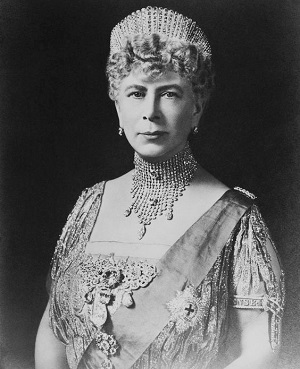 When Queen Mary (pictured above), wife of King George V of England, died in 1953 at age 85, she was buried with the pomp and circumstance befitting a queen in St. George’s Chapel at Windsor Castle:

An appropriate ending to a long and full life.

Now another Queen Mary, this one also 85 years old, is at the end of her long and full life, and nobody knows what the hell to do with her.

She is this Queen Mary:

This Queen Mary resides in, and is owned by, the city of Long Beach, CA.

Queen Mary of England was quite the grande dame, and no doubt considered her namesake ship a fitting tribute to her…grande dame-ness.

The 80,000-ton Queen Mary was built by England’s Cunard-White Star line, with construction beginning in 1930 at a Scottish shipyard.  The ship cost $17.5 million, more than $338 million today.

When the ship took her maiden voyage in May 1936, she wasn’t just huge (more than 1,000 feet long) and fast – she was “the grandest ocean liner in the world,” according to queenmary.com.  Celebrities and other wealthy passengers enjoyed five dining areas, two swimming pools, beauty salons, a grand ballroom, air conditioning in some public rooms, and a host of other luxurious amenities.

In 1939, with the second World War on the horizon, the Queen Mary was converted to a troopship, carrying soldiers to various battlefronts. The ship’s hull and funnels were painted battleship gray, earning the ship the nickname the “Grey Ghost,” and it could carry up to 15,000 soldiers at a time:

After the war, the Queen Mary was refitted for passenger service, and she continued sailing until her retirement in 1967.  Her second life began in Long Beach, opening as a tourist attraction, hotel and museum in 1971.

It was a good idea then.

But that was then, and this is now:

It’s not a surprise that an 85-year-old ship may be sinking.

It’s not a surprise that an 85-year-old ship requires a lot of expensive maintenance.

And it’s not a surprise that there’s a lot of blame and finger-pointing about who didn’t provide that maintenance and who’s going to pay for it now – the city of Long Beach, which owns the ship, or the most recent of the various companies that have operated it.

What is surprising to me is how many really bad options there are for the Queen Mary’s future, including these, according to various articles:

Then there was a reference to a vague plan to “build entertainment around the ship would generate the tens of millions of dollars needed to do more repairs,” and I can see some possibilities in that.

For example, the city could host daily “Will the Queen Mary Sink Today?” parties and charge admission to watch in person.

Or how about selling raffle tickets – “Guess the Sinking Date of the Queen Mary!  Whoever Comes Closest – Wins!”

Or how about Long Beach charging people to come aboard the ship dressed in costumes from 1912, and do a reenactment of the sinking of the Titanic – with an actual sinking ship?

And that sinking would be the real deal, because just like the Titanic, the Queen Mary has lifeboat problems too, said the Los Angeles Times article:

“…the ship’s lifeboats and lifeboat support systems show significant signs of rotting and deterioration and need to be removed and replaced.”

Other issues:  “Structural steel is corroded, the bilge system is aging, the hull is compromised, and leaks and safety hazards abound.”

Not only that – the Queen Mary has been closed due to COVID since May 2020, and no reopening date is scheduled.

It’s clear that something must be done with an 80,000-ton possibly sinking pile that’s generating no revenue.

And there is an option, also in that $105 million to $190 million range, that will give the Queen Mary a third life – and life to lots of others, as well:

The Queen Mary could become an artificial reef.

“For decades old and decommissioned vessels have been scuttled and purposely sunk to create artificial reef structures.”

An article about the ship-turned-reef says,

“Before the Spiegel Grove was put down on the bottom, basically we had a sandy, flat bottom; with no structure, no complexity, no coral at all.  This structure has provided incredible relief and complexity for use of marine life.”

That marine life includes delicate corals and invertebrates, and more than 200 species of fish.

And fish aren’t the only benefactors – the Spiegel Grove has also had a significant economic impact on Key Largo, generating an estimated $25 million in tourism revenue in it first 10 years as an artificial reef:

Perhaps it’s time for the City of Long Beach to give the Queen Mary the final – and environmentally helpful and revenue-generating – resting place she deserves.

Perhaps it’s time for the City of Long Beach to remember that old saying about boats: