One of my jobs at the library is to loan books to other libraries.

Why, you may ask, would a library – building full of books – want to borrow another

Because it’s a book a library patron wants, but the library doesn’t have in its collection.  So they send out a request to libraries all over the country, called an Inter-Library Loan, or ILL.

By a large margin the most requested ILL book I’ve encountered – three, four, even six 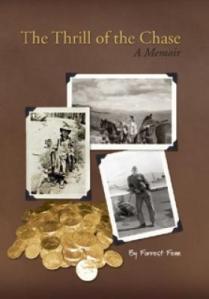 times a week – it The Thrill of the Chase by Forrest Fenn.

I couldn’t help but wonder – why?  It’s not a best seller and no movie’s been made, so why is this book so popular?

Forrest Fenn says – and that’s an important word, along with claims and alleges – that in 2010 he filled a chest with gold nuggets, rare coins, artifacts and gemstones worth more than a million dollars and hid it in the Rocky Mountains.

When asked why, Forrest says it was during the Great Recession and he wanted “to cheer folks up and to get them off their couches and into the great outdoors.”

Fenn’s Old Santa Fe Trading Company’s website says, “This book is the remarkable true story of Forrest Fenn’s life and of a hidden treasure, secreted somewhere in the mountains north of Santa Fe.  The book contains clues to the treasure’s location as Forrest Fenn invites readers to join in The Thrill of the Chase.”

As recently as February 2018, 86-year-old Fenn claimed in Business Insider that the treasure still hasn’t been found.  The article goes on to state that “Thousands have tried to find the treasure” and, “At least three people have died in the search,” though another

February 2018 article says the number of deaths may be as high as six.

Ah, the allure of getting something for nothing – the American Dream.

I’m thinking the only person getting rich is Forrest Fenn.