One night this past October at around 3am, a man entered a San Diego nursing home and went into a room where several female residents were sleeping.

He sexually assaulted one of the women, age 88.

When staff members heard the victim and her roommates screaming, they entered the room and the attacker fled.

Just six days later a suspect was arrested:  Lusean Arline, age 48.  Arline was identified as the alleged perpetrator through “evidence left at the scene” that was submitted to the FBI Combined DNA Index System (CODIS).  Police then tracked down Arline with help from the state Department of Corrections and Rehabilitation.

Arline had prior convictions, including one from 2017 for following two elderly women home to their apartment and exposing himself to the victims.

After his release from prison on October 10, Arline was arrested for a misdemeanor drug offense and jailed until October 24.  He allegedly committed the nursing home sexual assault three days later.

One local TV station noted that Arline has “a long rap sheet”:

DNA – an amazing tool that was unknown in police procedures until the late 1980s, and is now such a common part of our lexicon.  When we hear about a trial that includes DNA evidence, we know that evidence can be a huge part of a conviction.

This time around, Arline is facing felony charges including rape, elder abuse and residential burglary.  If convicted, he faces life in prison.

None of the news stories was specific about that “evidence left at the scene,” but when investigating a suspected sexual assault, police procedure is – if the victim agrees – to collect evidence and preserve it in a sexual assault evidence kit, commonly called a “rape kit”:

When tested, DNA evidence contained in rape kits can be a powerful tool to solve and prevent crime.

“When tested” are the magic words.

“When tested” are also the problem words.

Because, according to a July 2019 article in The Atlantic,

“Across the country, as many as 200,000 rape kits sit unopened in police storage while assailants – the people whose genetic fingerprints are decisively coded within such kits – are able to dodge prosecution and, in some cases, strike again.”

That means that in the U.S., thousands of people told law enforcement they were victims of sexual assault, and then subjected themselves to the evidence collecting police procedure.  This includes a doctor or nurse photographing, swabbing and conducting an invasive and exhaustive examination of the victim’s entire body for DNA evidence, a process that takes four to six hours.

How invasive and exhaustive?

Here are the contents of a typical rape kit:

And a list of items commonly included in a rape kit:

They wanted their day in court, to face the perpetrator.

Those untested kits have a name:  Backlog.

Backlog, because the rape kits have been in the evidence rooms, untested, for months, years, even decades.

Why would any rape kit go untested?

There are lots of answers online; when I googled “untested rape kits” I got 362,000 hits.

First up was endthebacklog.org, and they’re clear about their position on untested rape kits:

Endthebacklog.org is also clear about the why – why any rape kit would go untested – and the reasons are disheartening:

A lack of resources – money and people; rape kit testing costs on average between $1,000 and $1,500, and public crime labs are underfunded, understaffed, and overwhelmed.

A lack of clear, up-to-date public crime lab policies to reflect innovations in the fields of forensic science and criminal justice.

“Each time a DNA profile is added to CODIS, it bolsters the strength of the database and increases the chance of catching and prosecuting perpetrators of sexual violence and other crimes.  CODIS has continued to grow to include DNA from millions of offenders and arrestees; it now includes more than 10 million DNA profiles.

“The result has been a dramatic increase in the hit rate, or the percentage of cases in which DNA found at the crime scene or in a rape kit is matched to someone in the database.”

A visit to the CODIS website is an eye-opener – it tells us that:

“CODIS’s primary metric, the ‘Investigation Aided,’ tracks the number of criminal investigations where CODIS has added value to the investigative process.  As of November 2019, CODIS has produced over 491,537 hits, assisting in more than  481,098 investigations.”

Lusean Arline was in CODIS, and that aided his investigation.

Which brings us back to the 88-year-old victim in the San Diego nursing home.  I don’t know if the evidence was from a rape kit, but if it was, then it was one rape kit that did not go untested.

But what about those other 200,000 untested rape kits?

There is some encouraging news from endthebacklog.org:

“Jurisdictions that are deeply invested in bringing justice to survivors and preventing future crimes have dedicated the necessary resources toward addressing their backlogs and moving cases forward.

“New York City served as a model for the rest of the country when it committed to testing every rape kit in its backlog and aggressively following up on leads and prosecuting cases:

“Detroit is now working to pull together the resources needed to test every kit in its backlog of more than 11,000 untested kits and to investigate the resulting leads:

“In Cleveland, prosecutors have initiated cases against hundreds of perpetrators thanks to the testing of their nearly 4,000 kits:

“And in Memphis, nearly 6,000 kits have already been tested as the Memphis Police Department addresses its backlog of 12,164 kits”: 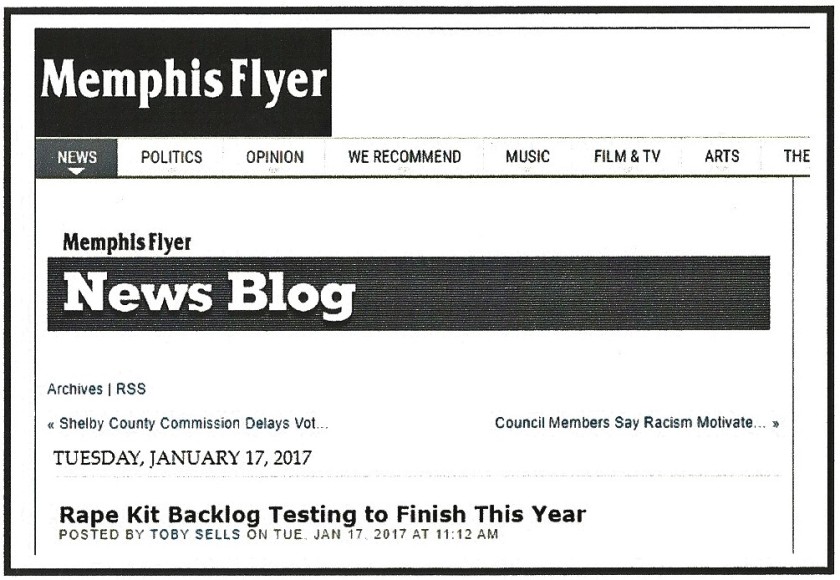 And these stories are encouraging.

But based on the image below from an ABC News story in January 2019, there is so much more to be done:

Yes, there is a smattering of good news like this…

But that good news is so far outweighed by the bad news:

There was good news on December 30 – though few major media outlets chose to tell it: